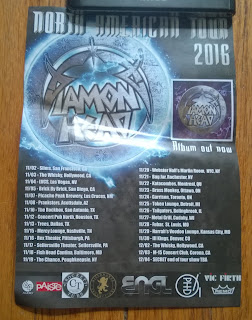 Borrowed Time
Bones
Lightning to the Nations
Diamonds
Helpless
Set My Soul on Fire
In the Heat of the Night
To Heaven From Hell
Starcrossed (Lovers of the Night)
Shout at the Devil
Sucking My Love
The Prince
Shoot Out the Lights
It's Electric
Am I Evil?
Encore:
Streets of Gold

Sundays are a rough night for bands to play out.  Everyone is broke and hung over.  It didn't help that the entire city felt like it was trapped in a wind tunnel for the past 48 hours and the weather was generally miserable.

Webster Hall is divided into several “rooms” depending on the type of event and anticipated crowd.  Originally billed to be at the 500 capacity “Marlin Room” - my friend/ photographer Rachel and I were a little off put when we were directed to the slightly smaller (400 capacity) space “The Studio”.  I filed that in the back of my mind and hoped there would be a crowd.  I've spent enough gigs watching legendary NWOBHM bands play a blistering set to me, four people and a dog- I was hoping that wouldn't be the case tonight.

The Studio is tiny but not cramped, and there are neat little nooks and crannies were you could comfortably hang out between bands.  Rachel and I perched ourselves on a bench near the restrooms where she rationalized if anyone we knew was at this gig – we would definitely run into them. 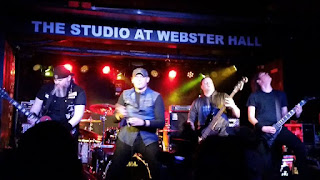 By the time Anaka came on there were less than 100 people milling around.  The band's friends and fans made up a good part of the crowd and were enthusiastically headbanging.  Anaka are a local Brooklyn band who've I've always said I would check out but just never got around to it.  I really liked them – their singer had a nice clean voice and great, comfortable stage presence.  They reminded me of a mix of Priest and Black Label Society.  I am definitely going to check them out again!

The room was staring to fill up a bit and we went back to our spot.  Some of the guys who were with Anaka started talking to me about my Motörhead tattoo and about Lemmy's lifestyle. We decided that switching from Jack and Coke to the “healthier” Vodka and OJ may have been what killed him. 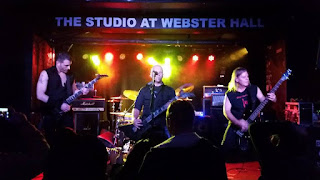 Metalifier were up next.  Another band whose name I'd seen but never managed to check out. Right off the singer/ guitarist reminded me of Tony “Demotion Man” Dolan from M:Pire of Evil and Venom Inc.  He was great at getting the now growing crowd going and was the quintessential true metal front man.  They live in the NYC area and include members from Poland and Columbia and definitely have an “international metal” feel.  Think Accept meets Venom and Iron Maiden with a little bit of WASP thrown in.  In the middle of their set Rachel turned to me, verified which band this was – and disappeared.  She was so impressed with their set she bought a shirt!

Another break and I thought there would be another band before Diamond Head so when the classical music came over the PA by the stage we didn't bother leaving our spot by the rest room – then I heard the opening of “Borrowed Time” and we ran out to watch Diamond Head. 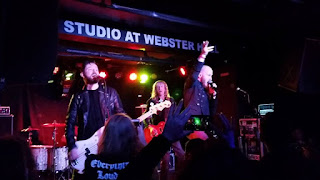 The first thing I noticed was rhythm guitarist Andy “Abbz” Abberley wasn't with them.  Singer  Rasmus Bom Andersen told me after the show that Andy had to leave mid-tour to go back to his day job.  It was disconcerting at first not to see him but the songs didn't suffer from his absence – although it would have been nice to see him play again.  Then again the band was always a four piece (excluding Canterbury) until the 2005 album “All Will be Revealed” .

Gone too since I last saw the band in 2011 was bassist Eddie Moohan who I was told was no longer interested in playing heavier music.  So I wasn't going to witness his wacky audience interaction and goofy faces tonight.  Dean Ashton was a more than capable replacement, and I watched him from my usual spot at a gig – in front of the bassist.

Also missing were Brian's signature White Flying V – which we were later told doesn't travel because airport security have a tendency to not be too gentle with musical equipment.  He was playing a Les Paul.

The set was a good mix of material from the band's newest release, simply titled “Diamond Head” with all the classics you would expect to hear from the band's 30+ year old catalog.  One thing I observed when the new tracks were played, the crowd didn't thin out because of unfamiliar material.  The enthusiasm level was still way up, and I noticed I wasn't the only one singing along.  After Ras proudly introduced one of the newer tracks, and mentioned they were indeed selling the new album at the merch stand – along with signed VINYL copies.  A few of the guys standing next to me RAN to buy it  – that's how impressive the new material is.

When they did “Lightning to the Nations” I had a moment of zen.  There was Brian Tatler, who is a legend in metal, a man who gave Metallica the blue-print to be in the upper echelon of the genre – and he was standing less than 20 feet away from me.  Later on the singer from Metalifier said that in his native Poland – there is no way he'd be able to get that close to a band of Diamond Head's caliber.  Here was a band that was headlining festivals in Europe – but playing to a 80% capacity room in New York City on a Sunday night.  What is wrong with this picture??? 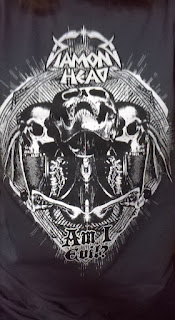 So much has already been written about the almost Shakespearean scale tragedy that is the history of Diamond Head so I won't get into it here.  But as I felt during the middle of Saxon's set last year – where's the justice????  And Iron Maiden, who in my opinion haven't made a decent album since 1988 are constantly headlining Arenas – meanwhile Diamond Head's newest release blows “The Book of Souls" out of the water and...

Oops sorry started ranting again...but this was all running though my head at the time – and then, as would happen many times that evening – I got hypnotized by Brian's playing.

“Helpless” was one of  first Diamond Head songs I ever heard and was really looking forward to enjoying it when out of nowhere –these three older women pushed their way to the front, spilling their beer all over the stage and screaming “BRIIIIIIIIIIIIIIIIIAAAAANNNNNNN” louder than Ras was singing.  The guys near me who at first happily let these hags in front of them – shook their heads and I could tell by their faces they were fed up too.  Thankfully they disappeared after that song.

From where I was off to the side I could definitely hear Karl Wilcox pounding his “AM I EVIL” drumkit but could barely see him.  Every once in awhile I would pop my head around the side and see a flurry of drumsticks flying around spiky blonde hair.  He's as solid and powerful a drummer as they come.

The band dedicated the rarely played “Starcrossed (Lovers of the Night)” to a fan who had seen them over 100 times.  Too cool!! 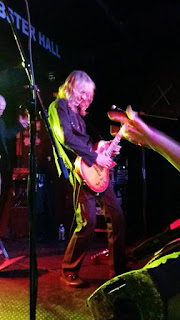 At some point in the night Ras expressed his love for New York city – how he was so so excited when Karl pointed out the Manhattan skyline on their way into the city.  You could tell Ras genuinely meant it and his whole face lit up when he talked about how comfortable he felt in New York.

Up next were four classic tracks in a row.  Ras was a blur, at one point I thought he was going to stage dive off the monitors and into the crowd – that's how caught up he was.  By the way, loved the purple skinny jeans – and apparently so did the guy who yelled “Nice ass” from the back of the room.  Hehe.

“Sucking My Love” was dedicated to us females in the audience.  Thank you – that's so romantic.

My favorite Diamond Head song - “The Prince” has everything I want in a metal song.  A great riff, intelligent lyrics – and above standard guitar solo.  Even back in my metal infancy days when I didn't know who or what the NWOBHM was I always liked this song since I taped it off a college radio station when I was still in high school .  Holy shit cassettes. Definitely one of the highlights of the gig for me.

The penultimate song of the evening was of course “Am I Evil” which is Diamond Head's “Ace of Spades” so to speak. Even if it irks me that people still think its DH covering Metallica, I'm sure Brian and original DH singer Sean Harris have the last laugh every time they check their bank balance. 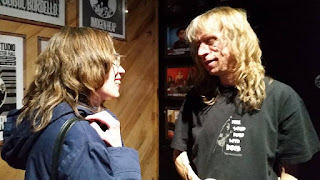 The band briefly left the stage only to return a few minutes later as Brian strummed out the opening of “Shoot out the Lights” When the song was over, Karl came out to thank the crowd for being so dedicated to them over the years, you could tell he wasn't just hamming it up – he was actually pretty emotional and really does appreciate all of us who have stuck with the band through the years.

After the house lights came on and people started heading towards the exists, Rachel spotted Brian standing by the side of the stage , ready to talk to the fans.  I had a nice little catch up with him and actually there is a photo of me physically glowing when he told me he remembered doing the Skype interview for The Ripple Effect and how he quite enjoyed talking to me!  Swoooon.... 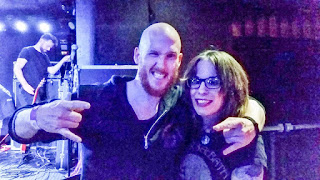 I thanked Ras for all his help, we'd been in contact on the band's Facebook page.  He really is such a good fit for the band, very professional and a great “kick in the arse' as Brian had said.

Rachel went back for one more photo with Brian “You just want to cuddle again don't you?” he joked.  Yes, yes we do Brian.

My interview with Brian:  http://ripplemusic.blogspot.com/2016/04/interview-with-brian-tatler-from.html