EXCEL: SoCal Thrash/Hardcore Crossover Group To Reissue The Joke's On You Via Southern Lord This November 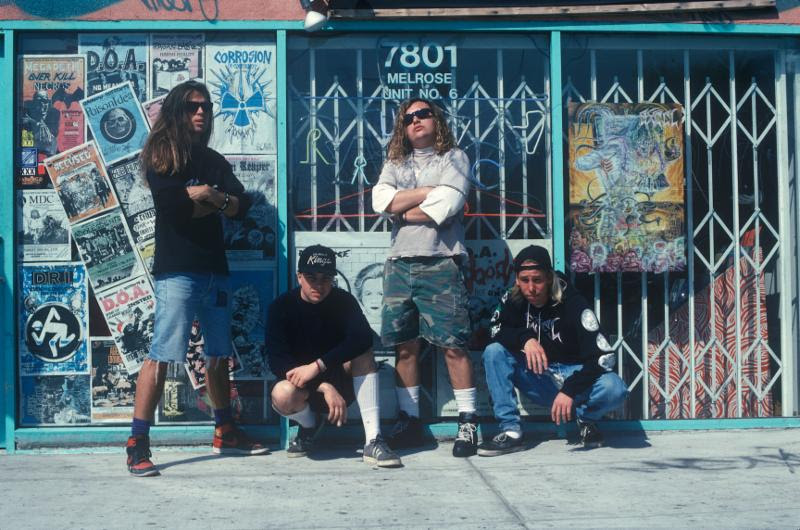 SoCal punk-hardcore-metal hybrid outfit EXCEL has remastered their seminal 1989 release, The Joke's On You, which is now set to be released via Southern Lord in November.

Originally released via Caroline Records, and produced by Randy Burns (Megadeth, Kreator, Possessed), The Joke's On You is EXCEL's second full-length, which saw wide acclaim from thrash, punk, metal, and skate rock circles, as members have been known to share ramps with pros Christian Hosoi, Eric Dressen, and Tony Alva, and others. Drawing influence from a diverse range of artists including Black Sabbath, Black Flag, Jimi Hendrix, and early era-Corrosion Of Conformity, people often talk of "crossover" acts, but none quite do it as exceptionally well as EXCEL.

The Southern Lord reissue of The Joke's On You, remastered by Brad Boatright at Audiosiege (Poison Idea, Integrity, Nails) contains the twelve tracks featured on the original CD edition, including the track "Blaze Some Hate" -- initially released as a 12" single via Caroline, not the original release of the LP - appears as the closing track of the new reissue/remaster. This isn't the first time Southern Lord has documented the importance of EXCEL either, as the label also reissued the band's first album, Split Image, in 2014.

Formed in 1984 from the remains of Los Angeles hardcore band Chaotic Noise, EXCEL caught wide attention of the masses with the release of their Personal Onslaught demo (1985). Fellow Californian thrash crossover influencers, Suicidal Tendencies, accelerated EXCEL into wide acclaim with frontman Mike Muir's inclusion of them on his Welcome To Venice compilation (1985) and releasing EXCEL's Split Image debut LP on the Suicidal Records imprint. Sold out tours and further successful releases soon followed, all which stomped over various sonic terrains whilst always spreading a punk attitude and a harbored love for heavy metal.

Southern Lord will re-release The Joke's On You on November 18th, but the album is now available early from the band's webstore RIGHT HERE.

"Shows a great deal of depth and development musically, and the lyrics are awesome." - Flipside

"EXCEL display a maturity and an honesty that most bands lack...they don't settle for basic boring riffs, they fill their songs with melody and tempo changes, always keeping it interesting. The lyrics are top notch too. Nothing clichéd here. Intelligent stories and ideas...a band to pay attention to." - Ink Disease

"Really good. No fooling'...Powerful and clean slow hardcore. More lyrics than you can shake a stick at." - Maximum Rock And Roll

"A gripping, grinding, adventurous ride...The Joke's On You will send shivers up your spine while shaking the posters off your wall. And that's no joke." - Rip Magazine

"And the new songs were the best of all, stunningly complicated, multipart riffs alternating with simple, powerful choruses, something sort of in a supercharged Soundgardenian groove, yet wholly Excel." - LA Times (1992)

"Sure the band cut its teeth with a tear-it-up three-song appearance on Suicidal Mike Muir's Welcome to Venice compilation. But this is undeniably an LA band, its various members brining the spectres of personal influences to the group to produce a hard-driving maelstrom..." - Thrashmetal Magazine (1985)