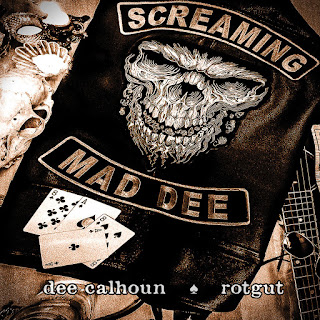 'Rotgut' took me by surprise a little bit, to be honest. I am very familiar with Dee's work as frontman with the legendary Iron Man and, of course, After Therapy before that. So I know what a fantastic singer he is. Despite hearing through the grapevine that his solo debut was going to be acoustic, it still was not what I anticipated. Metal, doom and cajun music mixed together with Romantic Movement poetry might not sound like the perfect match but when Dee is orchestrating the proceedings everything comes together perfectly and the end result is beyond words. 'Rotgut' is a barnburner of the highest pedigree and others contemplating a solo album, follow Dee's formula...do exactly what you want to. That, if anything, brings out the best results by far.

As outstanding as ‘Rotgut’ is, there are a six songs that stand out and represent Dee in full. ‘Unapologetic’, which is co-written with Al Morris from Iron Man, is true to it’s name, as it doesn’t apologize for anything. Blunt and naked, Dee makes no bones about who he is and what he has done. Those metal riffs played on an acoustic guitar are amazing, by the way. What a song the title track is! Sleazy, filthy down and out, and then some. A swamp song from the deepest recesses of Louisiana’s bayous, if there ever was one. The pain and suffering is so palpable you can cut it with a knife, especially with Dee belting out the lyrics with so much venom and spite. 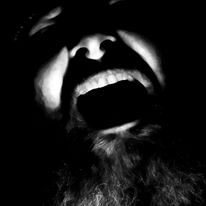 Different in approach and performance, ‘Little ‘Houn, Daddy ‘Houn’ is a duet between Dee and his son Rob. Musically it’s more upbeat than the rest, and albeit a love from a father to a son, there is still a sense of fear. As much as you want to see your kid grow up and lead his own life, it also scares you to see him becoming an adult. Eerie, angry and to the point, in ‘Backstabbed In Backwater’ Mr. Calhoun purges his disgust about being fucked over by your hometown and your love. This is the song for anyone who is, or have been, in a similar situation, as it will lift you above and away from the crap you’re going through.

Aided only by the escalating sound of a snowstorm, Dee sing/speaks the words to Robert Burns’ 1781 poem, ‘Winter: A Dirge’. And what a performance it is! Apart from being a fantastic singer, Mr. Calhoun is a great narrator which he so emphatically shows here. ‘A Long Day’s End’ is a fitting end to a great album. And it also works perfectly as a continuation to ‘Winter: A Dirge’, both musically and lyrically. It follows the way Burns wrote and with the added instrumentation, it is a one of a kind wonder piece.

To return to the beginning, Dee’s magic, apart from his amazing voice and songwriting skills, is the way he takes different styles and tie them together, making everything cohesive and move with an even flow. So many times in the past when a musician steps out from his/her band to make a solo album, it is all over the place making their efforts bland and uninteresting. Mr. Calhoun is on the other end of this spectra. With ‘Rotgut’ he has created a great work of art, while cementing his name as a top class artist even further. As mentioned before: established and fledgling musicians alike, study Dee’s creation and learn from him how to best make a lasting impression.