Year of the Cobra - ...In The Shadows Below 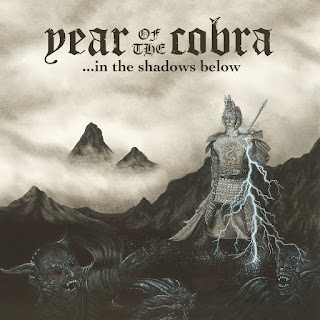 Wait, what? Racer said my reviews could be as long or as short as I wanted them to be, and that one word right there is all you need to know about this album. You want it, you need it, go buy it. End of discussion.

Ok fine, I'll talk about this new release a little bit more, but only because it really blows me away. If you are familiar with Year of the Cobra and their debut EP, then the first thing you will notice is that Amy Tung-Barrysmith's vocals are just leaps and bounds ahead of where they were on that recording, and they were pretty damn good on the EP. There is just so much more nuance and expression in what she is doing on this album. They say that bands really improve the more they perform and these songs are a testament to that. She has learned how to make her voice a top-notch part of what this band does.

If you aren't familiar with this band, its just two people, drum and bass, that's it. You will listen to these songs and you will swear that there is at least one guitar in there, if not two at times, but there isn't. The creativity shown by Amy in using her bass rig to bring so many parts to life in these songs is really fun to listen to. And Jon Barrysmith on drums holds up his end very nicely. I especially like his work on “Spider And The Fly” and “Temple of Apollo”. There is a lot of complementary playing, working off of the bass lines and putting just the right little fills and rhythms in place that move the songs along very nicely.

If you're wondering what they do, its doom. Some of it is right from the traditional doom playbook, but a lot of it isn't. There's even some nice thrashy sounding parts in “Persephone”, as if to show us that these two have lots of weapons in the arsenal. My favorite song on the album is “Vision of Three”. Its a nice slow build that relies on the drums to do the build up, and then pulls back nicely on the verse parts of the song. The lyrics are very cool, the playing is outstanding all the way around, and it is a joy to listen to. Who says doom can't make you feel you feel good? I never said that.

This is an amazingly good first full-length from a band that is growing and improving and has much more to say and show us. The album will be out at the end of the month on STB Records in various formats so make sure you get a copy in your hands. Go see them when they hit the road because their live show is something to behold, seeing two people bring such a full sound to the stage. This is definitely a band to watch, because they are going to be Godzilla-sized heavy in no time at all, and you'll be glad you got in on the ground floor.

Email ThisBlogThis!Share to TwitterShare to FacebookShare to Pinterest
Labels: ...in the shadows below, amy tung-barrysmith, doom metal, jon barrysmith, persephone, spider and the fly, stb records, temple of apollo, vision of three, year of the cobra