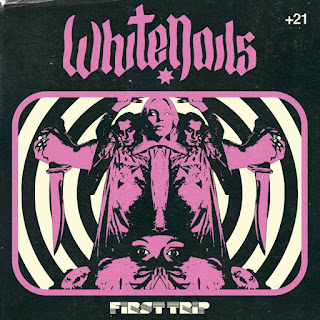 It’s with some trepidation that I open press emails from bands.  But it was a breath of fresh air to click a link from WhiteNails and find something energetic, catchy, well-produced, and thoughtfully conceived.

I’m not slamming all the other stuff coming through my inbox, per se, it’s just… it’s a weird time to be a music fan, and maybe a weirder one to be both a music writer and a label guy.  Literally ANYONE can make a decent recording these days and easily get it out to hundreds of online publications and record labels…but that doesn’t mean they should.  You listen to some of the stuff other companies are putting out and ask yourself, “How does this band have a record deal?  What does this label hear that I don’t?”  Nothing is certain.  Everything is a question mark.

If the biggest question mark is, “Are bands still capable of coming together in a vacuum, without the influence of label, producer or delusions of fame, writing killer music and putting out a great record, all on their own,” then the answer to the question is, “Yes:  WhiteNails.”

WhiteNails’ Frankenstein mix of up-tempo grooves, infectiously full vocal delivery and monster riffs was just so out of the blue…every section of every song reveals some new touchstone.  Was that Queens of the Stone Age?  Turbonegro?  Church of Misery?  Late 80s Ozzy?  Windhand?  WTF??!!?  It’s like someone threw my record collection in a food processor set to half-speed and laid the resulting furor to tape.

Excellent stuff, WhiteNails.  I demand vinyl.  Let me just make you a short list of labels who apparently have more money than they know what to do with so you guys can get someone else to pay for it…