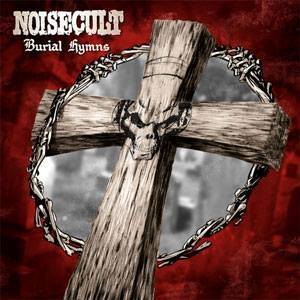 One of my favourite Nashville bands, heavy-hitters Noisecult, are back with album number six, Burial Hymns. And it is a delicious bag of assorted goodies they present. Sex new songs, six re-recorded songs and one cover is what's on offer and I love it. Don't know if my psychic abilities are on point or not, but to me the title suggests the end of an era and the beginning of a new. The new stuff on here show that Noisecult has found their way. At the same time, re-doing songs from their first three albums, all out of print or very close to it and will never be released again, tells me the band is ready to move on and continue to build on the path they have found. Therefore, 'Burial Hymns' closes one door and opens a new.

Starting off with five of the new tracks, Noisecult goes from strength to strength. The ballsy mix of Motörhead, Slayer, punk and good ol' metal has been honed to perfection with a really rich and full production to match. Opener 'Slipping Away(Into The Night)' is Slayer-ish in approach if Phil Campbell played guitar for them. 'Extermination Blues' is a straight-in-yer-face snarly punk-tinged metal track which leads into a trippy second half. 'Rollin' With A Fu Manchu' is a short sharp shock and kicks some serious ass in a Motörhead/Stoner fashion. Lurking and menacing 'Black Tide Rise' seeks annihilation and that's what happens. Mid-tempo for the most Noisecult crushes with the heaviness they unleash. 'Bunúsach' closes out section one and it is a short bass guitar-only composition which works as a great intro to '(At The) Gates Of Eternity', the first of the re-recordings. 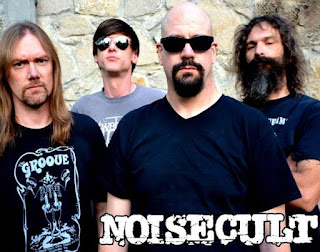 This second block is made up of five of the new versions and they are basically redone from scratch with the exception of 'Swarm Of The Electric Death'. Only the vocals and the bass guitar are new with some touching up done the guitar on that one. Sound wise what I like most about them - 'Just Another Blackout', 'Never Meant To Die' and 'SHeviL' makes up the five -  is how well they've made the transition to Noisecult's new-found direction. The playing is light years better than before as well the production which of course heightens everything. But having brought this older material together to sound much more cohesive is the key too. And to me that is real talent within any band. To take your older material and change things around a little bit making good stuff sound even better is not an easy thing. Noisecult has done that and then some. It's always great to hear '(At The) Gates Of Eternity' and 'Swarm OF The Electric Death', on album and live, but these new versions are killer!

The third, and last, part of 'Burial Hymns' consists of newbie 'Violent End', oldie 'End Of Days' and a cover of Beastie Boys' Gratitude'. And it's an amazing way to end this wax. 'Violent End' is criminally short but brutal! Slayer on speed playing is as close as it gets and it's not even two minutes long...badass! The redone version of 'End Of Days' is on point and is the same thrash metal song it always was but with such nice full sound. Very good indeed. Beastie Boys' 'Gratitude' turned out really good. The Hammond B3 makes a great addition turning the song into a modern day take on 70's classic rock. Listen to the very end and you'll hear THAT famous bass line...

If you have never heard Nosiecult before 'Burial Hymns' is the perfect introduction. You'll hear the band the way that are supposed to sound and it will only get better from here. For someone who has followed them for a while, this album is the logical and natural step. Having never stayed stagnate, they have always retained certain traits and shaped them along the way. And the end result is 'Burial Hymns' and it doesn't get much better than this. Greatness, indeed!