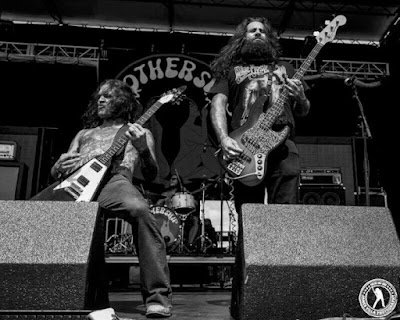 As appeared on The Obelisk.

In the wide world of heavy rock sloganeering, there are few urgencies as compelling as ‘Trip on the Ship.’ The invitation, courtesy of reliably brash Texas trio Mothership, is set to be renewed in the first part of 2017 with the coming of a third album. As yet untitled, one can only imagine it’ll be called Mothership III in the spirit of 2014’s Mothership II (review here) and 2012’s Mothership (review here), but that’s by no means confirmed, so don’t go quoting me on it or anything.

Whatever it’s ultimately named, the third Mothership record will be preceded by a new 7″ single, and as they did prior to the last outing, the trio of bassist/vocalist Kyle Juett, guitarist/vocalist Kelley Juett and drummer Judge Smith have started to play new material live. One can’t help but wonder how the significant amount of road time they’ve put in since Mothership II — touring alongside Corrosion of Conformity, labelmates Wo Fat and Brant Bjork, among others — will have factored into their songwriting. It certainly produced a leap forward their last time out, and for a band with the kind of vital delivery as theirs, it’s all the more a crucial part of the growth process.

Ripple put forth a quick line about the coming of the single and the album, and I hit up the band for some comment on the impending doings. You can see what they had to say below:

“Our third offering is fueled by the same supersonic intergalactic heavy rock and roll music that has brought us together today. We are confident this new batch of tunes will solidify your being on board with us, and motivate you to invite others to take a trip and join us as well. These songs perfectly capture the next chapter in our saga across this great planet and beyond. We are currently playing a few of these songs in our set, so come out and hear ’em LIVE before they are released!”