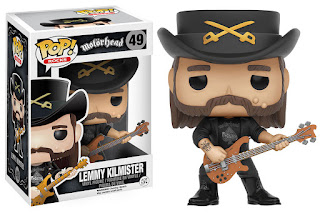 Collectors, pay attention! The Pop! vinyl figures have been featuring slightly adorable, caricatured versions of the world’s most recognizable figures from cartoons to comic to sports and, of course, to music! Last year the company issued a set of BabyMetal dolls and now they’ve added the iconic Lemmy Kilmister of Motorhead to their ranks!

Over the year, the late frontman has been memorialized in countless ways across the world from having various festival stages named in his honor and a stunning statue erected at his favorite haunt, the Rainbow Bar and Grill in West Hollywood. Funko, the makers of the Pop! vinyl dolls, have crafted a three-and-three-quarter-inch tall version of our beloved hero, which is set to hit stores in November of this year.

Lemmy is decorated in his signature crossed swords tophat, black boots, black jacket and an “Ace of Spades” shirt with the Motorhead logo across the top of the spade symbol. Pre-orders for the Lemmy figure can be placed at the Aggronautix website.

Speaking about the Pop! series, Funko director of marketing Mark Robben spoke to Fuse (via Blabbermouth) about the line’s overwhelming success, “This is now no longer just a collecting thing that is really kind of niche. Now it’s hitting everybody, there’s literally a license for everybody. If you like Batman, of course we got that. But if you like Supernatural or Orphan Black, or something that’s a little deeper and a little more narrow, we’ve still got it.”

Following Lemmy’s passing, Motorhead predictably ceased being a band, but the name has carried on strong. The latest branding to come under the band moniker is another alcohol venture, this time by way of the “Road Crew” American-style session pale ale.
Posted by The Ripple Effect at 8:30 AM