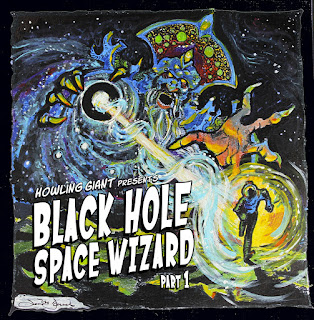 A while back I had the honour to review Howling Giant's self titled debut EP. To my extreme joy, the trio is back with another EP, 'Black Hole Space Wizard, Part 1'. So obviously I jumped on the chance to write about these Nashvilians and jump head first into the very interesting world they inhabit. As much as I still love their debut, the new wax 'Black Hole Space Wizard, Part 1' sees Howling Giant hone their skills tremendously and have taken giant - no pun intended - steps forward. Call it natural progression, if you like. None of the band's trademarks are missing. The humour, the laissez faire, the excellent musicianship, everything is still there. What's new is the progress Messieurs Polzine, Marks and Wheeler has made. The much dreaded word maturity comes to mind, but in the best sense possible. This EP is the first part in a concept story about the demise of Earth and one man’s fight for survival against the evil Space Wizard. Going in the conceptual direction is a bold move for any band, but it is here where Howling Giant’s growth is most apparent.

The story starts with ‘Mothership’ which is a giant spaceship where mankind exists in the future. While on the spacecraft the people first encounter the Space Wizard through scanner readings. ‘Exodus-Earth’ is a flashback to when Earth was destroyed, however the exact time of destruction is somewhat uncertain and hidden in secrecy. The first time mankind actually encounter the Space Wizard is in ‘Dirtmouth’ when he destroys ‘Mothership’. ‘Clouds Of Smoke’ leaves a sole survivor who escapes to the husk planet of Earth in a cloud of smoke, pondering his next move. The EP ends here and what the outcome is will become known when Part 2 is released.

A somewhat trippy intro to opener ‘Mothership’ before the band goes wide fucking open. An organ, courtesy of Drew Harakal, is featured heavily, which elevates this neckbreaker even further. Sparing nothing, the song builds up gradually from heavy levels to brutal levels. Spacey, out there and so amazing! I’m talking about ‘Exodus-Earth’. Going more for attitude and oomph than speed, it’s a head trip and then some. Again, helped by the organ, I just close my eyes and enjoy the travels through burning planets and pulsating supernovas. Furious, intense and in-yer-face, ‘Dirtmouth’ is vicious as the band tears me apart. This is by far the heaviest and most brutal Howling Giant song I have ever heard…and I love it! Closer ‘Clouds Of Smoke’ is slow, thoughtful and sort of dejected, a trippy desert song if there ever was one. The vocal phrasing reminds me so much of Dave Gahan of Depeche Mode. That’s probably unintentional, but this combination works wonder. Eerie, stoned out desert rock sung by the masters of electronica. Don’t fret, dear wave riders, because this is a fantastic song.

I love it when your favourite bands excels with each new release, especially when it’s done with such ease and elegance. You can tell when songs have been conceived just like that with no calculation or grand scheme behind them, other than having been beautifully crafted by excellent, humble yet determined musicians. Howling Giant are a one of a kind band and if people know what’s right for them, they will check out these hoodlums because these guys are something else. I mean, how can you go wrong when you tour in a white hearse?!