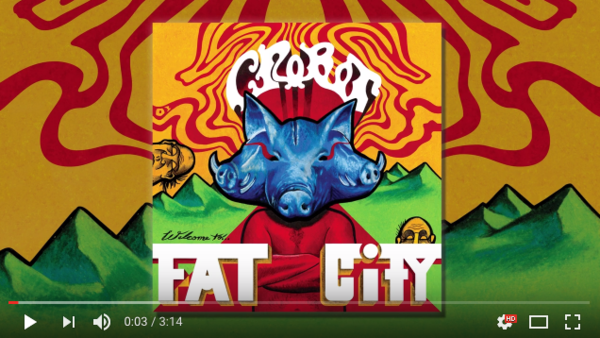 "Crobot is what you get when you brew some down n' dirty rock n’ roll, swaggering blues, doom-y, but not gloomy metal and sir psycho sexy funk. Call it music moonshine, concocted in a trailer park and best served in three-minute batches that make you feel like you have to take a shower when they’re done with you."
- CRAVE

Crobot are pleased to unveil, "Play It Cool," the latest offering from their new record, "Welcome to Fat City". Premiering exclusively on Crave, band frontman, Brandon Yaegley explains the story behind the brutal track - "This slinky, slimy track tells the tale of global destruction, but what are you going to do when the big blue blanket falls from the sky? Panic? Aww nahw! Turn this up and cut a little rug. It's all a roll of the dice and probability ain't on our side! If you thought we couldn't get any funkier, you'd be a fool with cowbell 'n all here's 'Play It Cool!"

"Play It Cool" is the fourth offering from the bands new record, which has garnered praise from Red Bull, Consequence of Sound, Juxtapoz, NOISEY and more. Due for release September 23, 2016 via Wind-up Records, the album, Welcome to Fat City is the bands second studio release, and the highly anticipated follow up to Something Supernatural which saw the Pennsylvania based four-piece dominate the US and European live scene, landing them tours with the likes of Motorhead, Volbeat, Anthrax, Clutch, Black Label Society, Chevelle, and more.

Winning the hearts of audiences at festivals like Rock on the Range, Sturgis and UK's Download Festival, Something Supernatural was also praised by the likes of Yahoo! Music, Revolver, Billboard, Huffington Post, Drum Magazine, Guitar World, Blabbermouth and was featured as VH1's "That Metal Shows" Pick of the Week."

Recorded with producer, Machine (Clutch, Lamb of God, Every Time I Die), and mixed by engineer Alan Moulder (Foo Fighters, Nine Inch Nails, Them Crooked Vultures, Led Zeppelin), Welcome To Fat City is due for release September 23 via Wind-up Records. Catch the band on the road later this summer with Sevendust.