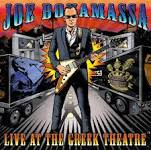 Around these parts, I'm pretty much known as the guy who writes about the most vile and foul music from the deepest, darkest recesses of the music world. It may come as a big surprise then when I tell you that I have a very deep love of the blues. It's not often that we get something like this to review so I was more than happy to pop in this DVD and see what was in store.

I have a personal Joe Bonamassa story. I saw him probably 15 years or more ago on what had to be one of his very first national tours. He was opening for Buddy Guy and I was blown away with Joe's performance, so after his set I went to his little merch table to pick up a copy of his first album. No one else was there and Joe himself was selling merch, so I got to get my CD signed and spend a good five minutes just chatting with him. I remember him to be a really nice guy, very personable, and I decided I would kind of watch his career and see where he went.

Fast forward to this release and to this bluesman, who is probably the top dog of the blues world, at least among the younger performers. This DVD is a performance from his 2015 tour for the “Three Kings”, who, if you aren't familiar, would be Freddie, Albert and BB. He does several numbers from each guy, and there are some really cool song choices. There are the obvious ones and some deeper cuts, which tells me Mr. Bonamassa put some thought and effort into the set list.

Each blues guitar player has their signature sound, and just like other genres, you can tell who the player is just by listening. It's fun to hear Joe pay homage to each man by throwing in some signature licks here and there, and then of course hear him throw his own touches on each song. I was especially blown away by a couple of the Albert King numbers. I've always thought of Albert as a particularly fierce performer, and “Angel of Mercy” and “Cadillac Assembly Line” are both very intense songs about just how hard it can be on a working family. Joe does these songs proud and his playing is every bit as fierce as Albert's. Those two songs were played back to back and really stood out to me as highlights of the show.

This is a really great set and the performances are almost flawless. Mr. Bonamassa has assembled a great band to back him. I love a blues band with a horn section and the guys playing on this show are fantastic. As a huge fan of SRV it was also cool to see Reece Wynans on the keys. And of course it wouldn't be complete without seeing Joe playing several vintage guitars from his collection and trying to replicate the instruments that the Three Kings played.

All in all this is a great release and I think anyone who even has a slight interest in the blues would enjoy this. The stage production is fantastic and the concert was shot and captured very well. This is a first rate release and really, we shouldn't expect anything less from Joe Bonamassa. Check this one out for some great music and entertainment.