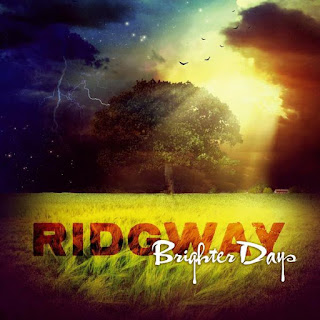 Let's be honest.   Reggae as pop music is a tough sell.  Other than the legends of the field, very few artists have ever hit the charts with a reggae vibe.   And for an indy band to incorporate reggae into their sound is an even tougher sell.  Sure, some bands can pull it off, Sublime being tops on that list.  But more often it either comes off as simple watered down reggae, frat-boy party rock, or indy rock pandering to a reggae vibe while ignoring all the subtleties that make reggae so special.  To be able to incorporate the real essence of reggae, blend it with quality indy rock musicianship and wrap that all up into songs that are catchy and lively takes a special band.

Comprised of Forrest Bousquette (vocals/guitar), Erik Trignani (bass), Keelan Scarth (drums), Jordan Kulp (guitar, keyboards, vocals) and Jack Buzian (guitar, vocals), Ridgeway plough that fine line between reggae and indy rock, keeping their sound rooted on both sides of that razor's edge to impressive effect.  This is immediately apparent from the instrumental introduction, "Overcast" with it's neo-Explosions in the Sky guitar effects-- swirling hypnotic six-string lines of psychedelia.  Underneath a gentle reggae beat keeps the occasional time signature present, but fades away to pure rock as the solo guitar rises to the forefront, which then immediately drops out as the song fuses into "Brighter Days" and the reggae beat rises to the forefront.  Forrest's voice carries the proper reggae lilt to bring things forward into what seem like will be a standard reggae vibe, but true to form, Ridgway isn't content to let that be the way.  Heavy guitar riff through at the choral break, ambient, near-dub hypnotics rise and fall, the heavy riffing returns, the beat goes on.  All seamlessly, and perfectly.

Tops on the disc are the songs "Revelation", "First One" with guest vocal by the talented Celina Ventanilla, and, "Barnacles"- the most rocking song on the album, and the sensual "Faraway" with it's dub-coolness and Forrest stretching his vocals to impressive results.

I happened to catch the band live at a parking lot ReggaeFest, and it was great to see (hear) them bring to the live stage the intricacies and performance that they captured on disc.  Their sound is much more full than one would expect of a reggae rock band, but that is epitomized by the presence of 3 guitarists, each capable of bring fresh licks to the moment.   And it's that ability to wrap their reggae vibe in multiple guitar harmonies, soaring notes and electrifying leads that lifts Ridgway to the top.

Like many young bands, (the members range in age from 19-23) they're still seeking to cement down to their final sound, which no doubt will bring more rock elements into their reggae vibe.  A song like "Trust Me," with it's boasting rap probably needs to be rethought, and developed into something that has a little more to say.   Still, as a debut, the musicianship is stellar and you can almost hear the development as songwriters as each song unfolds.

The future looks very bright for the lads of Ridgway and for lovers of indy reggae rock in general.  Can't wait to see where these guys go next.