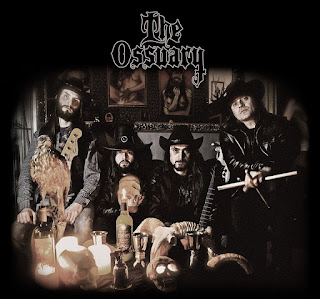 Italian doomsters THE OSSUARY sign with Supreme Chaos Records. Consisting of members that have been active in the underground scene for long this new ensemble mortale introduces with heavy doom rock breathing the spirit of Black Sabbath, Saint Vitus, Pentagram and the thrust of early heavy rock bands like Cactus, Captain Beyond, Wishbone Ash.

The debut album entitled “Post Mortem Blues” will hit the street by January 2017. The title could not be more fitting. Unpolished, pure sounding 8 titles that send you straight back to the 70s where THE OSSUARY would have been easily one of the heaviest bands on the planet.

“We are really happy as we didn’t imagine this could happen when we first put this new band together just one year and a half ago. Things went fast but we know we worked hard and signing with Supreme Chaos Records is one hell of achievement - the first one in our case – and it’s great to know we have a home for our future record “mournings.”

The song “Graves Underwater” taken from the album can be listened in its entirety here:
https://soundcloud.com/…/the-ossuary-graves-underwa…/s-MIQFM