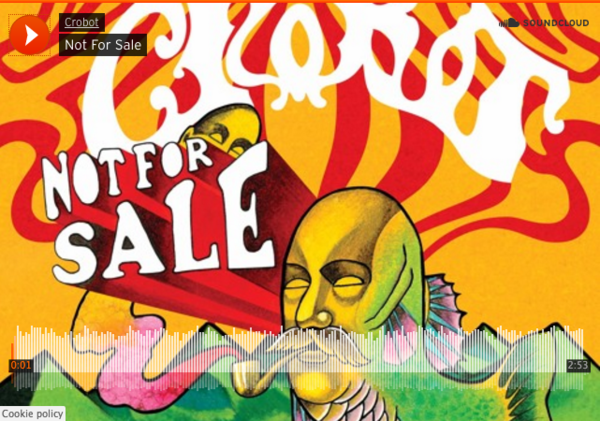 "It skewers the band’s sound further towards the stoner-metal side of hard rock than ever before, Chris Bishop’s sped-up sludgy riff forcing the track forwards while Brandon Yaegley pushes his voice into its glorious upper reaches. It’s less Wolfmother and more Red Fang, the sort of track that makes you want to grow your hair down to your ass and order nothing but takeaway for three months."
- NOISEY
Crobot are pleased to unveil their latest single, "Not for Sale" as the first sneak peek to their upcoming album, Welcome To Fat City. Premiering exclusively on Noisey, from start to finish and in true Crobot fashion, this ripper doesn't stop twisting and turning like a hard rock tidal wave.  It gives you just enough time to come up for air, only to get pummeled back into the groovy undertow.

Talking to the Noisey team, band frontman Brandon Yaegley noted that, "Not for Sale" takes you into orbit around the sonic spectrum of our latest album and is an anthem for all of us who work hard enough to make our own luck.  It's a cry to hold on to our own humanity, never letting anyone else manipulate our destiny.  Who paid your debt to be here? No one...and my soul is not for sale."

The single is a highly anticipated follow up to their debut album, Something Supernatural which saw the Pennsylvania based four-piece dominate the US and European live scene, landing them direct slots with the likes of Motorhead, Volbeat, Anthrax, Clutch, Black Label Society, Chevelle, and more. Winning the hearts of audiences at festivals like Rock on the Range, Sturgis and UK's Download Festival, Something Supernatural was also praised by the likes of Yahoo! Music, Revolver, Billboard, Huffington Post, Drum Magazine, Guitar World, Blabbermouth and was featured as VH1's "That Metal Shows" Pick of the Week."

Recorded with producer, Machine (Clutch, Lamb of God, Every Time I Die), and mixed by engineer Alan Moulder (Foo Fighters, Nine Inch Nails, Them Crooked Vultures, Led Zeppelin), Welcome To Fat City is due for release September 23 via Wind-up Records. Catch the band on the road this summer with Sevendust.
Posted by The Ripple Effect at 8:30 AM