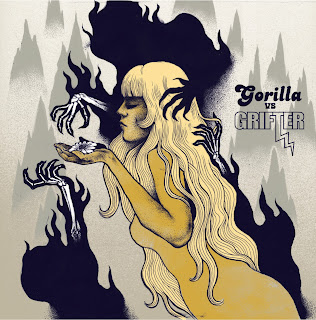 Not every band or album has to break new ground. This split release from HeviSike Records is a perfect example of that. These are two British bands that stick to the tried and true formula of straight ahead rock. They drop the hammer from the first beat of the first song all the way to the end, and only then look up to admire the trail of destruction in their wake. These are the kinds of bands that you hope are playing when you go round to the pub on a Saturday night, because you know you're going to wake up the next morning bruised, hungover, and with a wee bit of trepidation in your gut before you roll over to see what that lovely lass from last night looks like in the light of day. Basically, everything you want from rock n roll.

Gorilla has 4 songs to share with us, and light the fuse with what sounds like a tip of the cap to Motorhead called “Both Barrels”. I mean, it sounds like Motorhead, what else do you need to know? They downshift a little for the next track, “Slay Rider”, but only enough for you to grab another cold one and make your way back to the front of the stage where everyone is head banging like there's no tomorrow. “Grind Yer Down” starts out with a greasy, grimy riff and then proceeds to rock out while exhorting you to not let life grind you down. “Three Squeeler” starts out like some classic doom but doesn't stay that way for long. We get some awesome cowbell and then the band rocks the fuck out. I'm sure there is some kind of inside joke with the song title. At least that's how it feels. Or maybe some British slang. I actually don't really care when a song rocks like this.

Then we flip the record over and Grifter does their thing, which is just different enough that you know its another band, but not so different that you lose any momentum. I love split albums like this that pair up bands that fit together well. Grifter start off their side of shenanigans with “Failing Asleep”. No, I didn't type that wrong. This is a solid, steady rocker that gets your head bobbing along. These guys play with just the right amount of groove in what they do and it makes their tracks very enjoyable. “Paige Turner” is next, which as much as I can tell is an ode to being a teenage boy discovering the joys of porno mags. Not that I would know anything about that, but these guys seem to nail the feeling. “Hi Waisted” comes along next and the party just keeps rolling on. As I said at the outset, not breaking any new ground here, but plenty of heavy, groove based rock. And again, as with Gorilla, it seems like there must be some inside jokes being shared. Grifter closes off their side with “Me Love”, and when it's over, it feels like the party ended much too soon.

Both of these bands are worth exploring further, as I plan to do. I love the feeling, the power and emotion that bands like this bring to the table, and it is a pleasure to find a gem of an album like this. This one is most excellent and something you most definitely need to add to your collection.