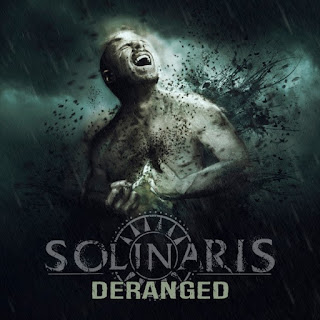 I love technical death metal, so I always get a little excited when I see a new release from that sub-genre in my inbox. The guitars all go “weedly deedly”, the bass goes “woodly doodly”, the drummers get insane, the songs bounce all over the place between tempos and time signatures. It all just makes my music nerd heart happy.

Solinaris is just such a band. They hail from La belle province of Quebec, they've been around since 2012, and “Deranged” is their first full length release. Except, these guys are not content to be just a tech death band. Spend a little time with this album and you will hear that there is not one track out of the ten on offer that stays a tech death track all the way through. In my opinion, this makes the album that much more interesting and listenable. All of these guys have chops for days on their particular instruments and it's fun to listen to.

I'm not sure if you could call this a full blown concept album, but it definitely revolves around the theme of the mind of a serial killer in his last moments of life. Has he been caught, convicted, given the death penalty, lying on a table and awaiting the lethal injection that will end his life, as he has ended the lives of others? Is he on the run, surrounded by the police, and it's just a matter of time before they take him down, because he has decided that there is no way they will take him alive? We don't really know, because the songs don't go that deeply. I can tell you this, though. If these tracks are any indication, those last few moments are very interesting.

I listen more to the music, and the moods that it evokes. From the imaginations of these talented players, the album seems to say that many things are flashing before the eyes of the killer. There are, um, deranged moments, which sound exactly like you might think of the mind of someone such as this. Interestingly, there are calm, serene moments as well, with some songs not even hinting at metal, or even heaviness, in any form. All of these songs, though, have a twist, a zig when you think it will zag, and no song can be pinned down to be exactly what you might think it is from the opening moments. This is some very creative songwriting and not just the typical pummeling you get from this type of death metal. I found it to be thoroughly enjoyable and have spent a fair amount of time listening and digging in to what these gents have to offer.

If you like to be challenged a bit with your metal, if you like music that will lead you to think and contemplate what is outside of your normal existence, you should most definitely give a listen to this new release. Even if you are sometimes put off by tech death, there is enough here to sink your teeth into that you will surprised and entertained. Odin says check this one out.