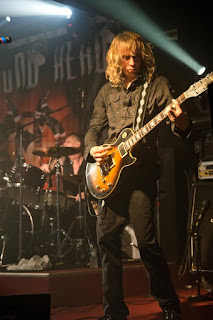 So ...as most of my Ripple articles begin...it all started on Facebook.  Our Editor n' Chief Racer put out the call that Brian Tatler from Diamond Head would be available for interviews and tagged me in the post .  I was on that shit in ten seconds.

After emailing DH's lovely PR liaison Paula back and forth and rescheduling, I came to the conclusion that because of yet another family emergency – wouldn't be available to do the interview at the scheduled time -and emailed her the sad news.

Well – I have to say fortunately that email never went through or wasn't sent in a timely fashion because at noon yesterday my phone rang and “Unknown” flashed on the caller ID.  My heart sank.  I was in the street, it was windy as fuck and this was Brian Tatler calling.  He left a voice mail, pronounced my name correctly and told me he'd be available on Skype.  I ran the hell indoors, found a quiet spot and rang him on Skype.  I didn't bother doing any research because time was of the essence and I was eager to speak to him again.  (more on that later)  Besides above all else I'M A PROFESSIONAL.  I GOT THIS. 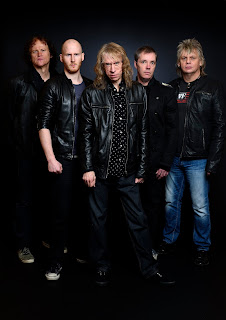 Right off the bat I asked Brian about new singer Rasmus Bom Andersen and how having fresh blood was helping the band, “It's given us a big kick in the arse!” Brian joked, “Ras had a great overview of who Diamond Head are and is aware of the unique Diamond Head sound and what we've done in the past.  He was actively involved in the song selection and was adamant that the new album, [simply called Diamond Head] has our signature sound, I'm really proud of Diamond Head's history, we're still going strong after 35 years”

I asked about how difficult it must have been recording with former singer Nick Tart who lived in Australia, “We couldn't really write with Nick...it was difficult.  Rasmus lives in London and he would take the train up here and we'd have 8 hour sessions then he would take the last train back down to London and do it all again! It was great!” 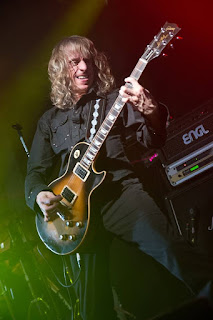 I mention it's a slippery slope being such a historic band, trying to win over younger fans and how tempting it is for some of the older bands to change their tried-and true style, sometimes to disastrous results.  “I write in a particular style, we can't compete with bands like Gojira and Lamb of God, this is Diamond Head.  It took awhile to dawn on me, I tried experimenting [i.e Canterbury in 1983], then I realized I just want to do stuff I like and we [the band] like.  At the end of the day I have quality control and I have to please myself and just hope the fans are pleased as well.”

I asked Brian if he remembered meeting me a few years ago when the band played a sold out show at New York's prestigious BB King's, I talked to him about how so many of the bands from back in the day are still going strong with few and sometimes only one original member, Of course he remembered that conversation (because I'm awesome) but on a serious note said, “I'm the only original member of DH, I came up with the name, and I've kept the flame alive since 1976.  At the end of the day, the fans are there for the songs.  Look at a band like AC/DC – at the moment they've only got one original member left! But it's the songs the people come out for.” 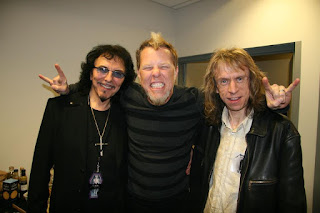 On that note, we talked about how bands like AC/DC will come out and do one or two songs off whatever album they're currently promoting, and the rest would be a greatest hits set, versus a band like Iron Maiden who just steamrolled through New York supporting “The Book of Souls” - and the set was 80% new material.  I confided I didn't think Maiden's new album was strong enough to carry an entire set and Brian said, “It would be nice to be at Iron Maiden's level where the fans will come out regardless of what the new material is, but I believe in giving the fans what they want. I'm happy to play “Am I Evil” at every gig – it's my favorite Diamond Head song.  Do you know Metallica have performed “Am I Evil” live over 750 times?  It's fantastic!!  Their cover was originally the b-side to “Creeping Death” - we had no idea how huge Metallica would be!  I'm forever grateful to them – I have the freedom to do what I want now – I've played in covers bands and given guitar lessons but I don't have to work a 9-5 job anymore! And we've all bought houses...so “Am I Evil” has been very good to me and I'll always be happy to play it!” 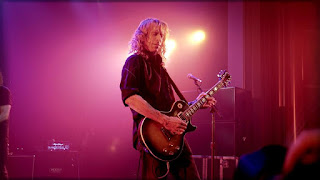 When will fans be able to see this new version of Diamond Head live on the road, “We've got a full European tour coming up including dates at Hard Rock Hell, Bloostock and Sweden Rock.  We hope to be coming to the states again very soon.”

“I'm looking forward to seeing you in New York again – I'll be there!”