A Ripple Interview with Joel from Witchskull

I was pretty lucky…My Dad was into The Beatles, Zeppelin, Deep Purple, Pink Floyd etc, so I got a good grounding in quality music from the start. I remember him buying AC/DC’s Powerage and playing it to me when I was about 8 years old. He stressed how good they were and it really stuck with me. Bon era AC/DC is the best band ever in my opinion.

When I was about 13, I heard my Brother playing No Sleep til Hammersmith from his bedroom. I was literally lost for words, it completely blew my mind. Nothing has ever given me that feeling since, and probably never will. Motorhead were the most important band in history for me.
Marcus first heard Sabbath Bloody Sabbath when he was 12, and that had the same effect on him.

With Witchskull, a lot of our stuff comes from a single riff, often made up on the spot, that we then build a groove around. We then play the groove for weeks or months until it kind of arranges itself. We all bring riffs to the table, but obviously more come from Marcus and Tony. Marcus is responsible for all of the melodies and lyrics which gives us our unique sound I guess?

For me it’s Motorhead, AC/DC, Venom, Sabbath, Priest, and all of the cool first wave thrash stuff. We all went through our teens listening to NWOBHM and then Slayer, Metallica, Mercyful Fate, Exodus etc but we were also influenced by the stuff that came before all of that. The bands that all 3 of us agree influence us the most would be Sabbath, Motorhead, Priest and Venom I reckon? A ton of other early suff too…I could go on forever. There is definitely a strong underlying blues element in there too.

Marcus reads a lot and plays guitar for hours every day and generally formulates ideas through his sun-consciousness. A lot of our songs come from jamming, so every rehearsal creates inspiration and motivation for us all. 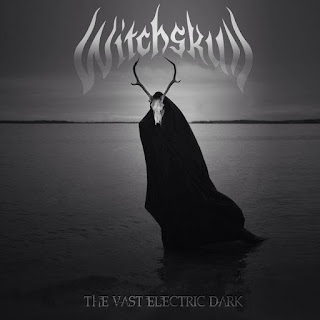 Marcus and I are from Canberra, but Tony moved here from NYC in 2005. Canberra is a pretty unusual place, but its home you know? In the early days Marcus and I went to school together and ended up playing in a speed metal band in 1985. We were both heavily involved in creating a DIY scene in Canberra because no pubs would let you play back then. I am not sure how Canberra reflects in our music, but being from Australia definitely effects how you sound. There is a lot of mongrel in most Aussie bands I reckon.

Tony had the name in his head for a long time. He and Marcus got the band going initially, but when things weren’t working out with their drummer, Marcus told Tony I would fit right in. I was living 1200km away when they asked me to complete the line-up, and once I moved back to Canberra we got straight into it.

The Australian classic Stormboy would be Marcus’s choice and I think Tony would want to do a Godzilla movie!

Bomber by Motorhead…The studio version is simply the greatest 3 and a half minutes of music ever committed to tape in my opinion.
Love or Confusion by Hendrix for Marcus and War Pigs for Tony.

We just want to play what feels right to us. We talk a lot about keeping things simple and raw. We want to play what is in the DNA of all three of us…It isn’t pretty, but it’s real. If you are true to that then everything will flow…pure and feral.

We are going to film the making of the second album in New York in October 2016…The whole thing will be more Spinal Tap than Spinal Tap!

We absolutely love playing live. We work hard, sweat hard and have no inhibitions. We are older blokes and don’t give a fuck what anyone thinks of us. When you genuinely have that attitude people can feel it. They can smell bullshit a mile away, so with us they know we mean it. Most of the time it has a party vibe to it…We want shit to swing but be feral and heavy as fuck.

The groove is the main thing for me, then the melody, then the riff…The other two would have the riff before the melody though I reckon. Obviously the narrative is important also.

Marcus wrote a song called “Falling Deeper Down” when he was 6…He sang it to his cousin Caroline who is now married to Tony. She still remembers the song.

Raise the Dead is pretty special to all of us. Marcus did an outstanding job with the lyrics on that one.

(Marcus:) Wino is the man! He has written so many killer songs.

I love vinyl because I grew up with it as a kid, but to be honest all of my listening was done on cassette until the mid to late 80’s. I tend to listen to most of my music in the car at very loud volumes, so CD’s are the main thing I use, but there is something about reading through a gatefold sleeve while playing a record that is hard to beat. Tony still listens to vinyl mostly and has a great eclectic mix of Blues, Funk, Rock and Metal records.

Beer…I don’t really drink liquor, I like Guinness and IPA’s most, and can’t wait to try some of the fine US beers when we are over there next year! Tony is a whiskey and beer bloke, but Marcus is more organic!

A couple of brothers that Marcus and I went to school with run Landspeed Records in Canberra. They are into pretty different shit to us, but they are good guys and the store is a bit of an institution now. Definitely worth checking out if you ever head down here.

We are recording the second album in NYC in October 2016. Prior to that we will be writing and gigging throughout Oz. We are hoping to do a showcase gig in New York, and maybe one in San Francisco if possible in 2016? Then just work on playing overseas if at all possible?

Thanks for reading this far! We hope to see you all in the not too distant future, so come and have a drink with us! Cheers Joel