A Ripple Conversation with Steve Darrow of Sonic Medusa 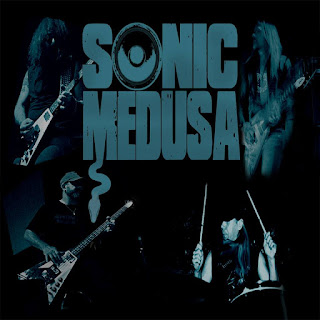 Hendrix, when I was too young to remember!
My Parents told me I freaked out over Jimi when I was about 2-3 yrs old ( that was in 1967, so AYE & AXIS where still new then ) I had a Hendrix poster on the celling over my crib... After that It was Alice Cooper in 6th grade (some kid brought in a Cassette to class and it flipped me right out ) Black Sabbath shortly after that. Then by '77-'78 my friends and I got deep into Punk, the 1st wave. Iggy, Damned, Runaways, X-Ray Spex etc. Then a few of the Local L.A. bands where blowing  etc. minds around the same era.

Well, for Sonic Medusa it's usually a riff, or more often, a loud, mindless jam between bass / drums & I. Just about all of our songs came out of nonsense jams. But a few of the songs have been drafted from the ground up, based on a riff.

Usually to the past, and Movies for me.

Thats a hard one, being from LA. Only because theres so much here & so much has come out of here. The big misconception's are:
A) It's Really easy to become famous here.
B) Everyone here is super groovy & mellow & record contracts grow on trees here.
C) That in a town with so many thousands of musicians, that it's gonna be simple to just find a bunch of dudes to play with and start a band overnight.
D) That all these musicians that are here are going to dig & understand exactly the stuff 'you' are into.
F) Also misconception that either all the Musicians are like the Eagles / Jackson Browne or Van Halen / Motley Crue or Red Hot Chili peppers. There's also really no 1 'Scene' or 'Scenes' like there was 20 or more years ago ( at one point you had the Punk/ Hardcore thing running parallel to the early Hair Metal Scene etc.Then A slew of other local genres / scenes all buzzing at the same time, up until the '90s)
There's NO 'L.A. Sound' right now. It's all a mush of rich kid's paying to play or Singer/ SongwriterS being coaxed out here by what's let of the Major labels that have stayed afloat here in town. 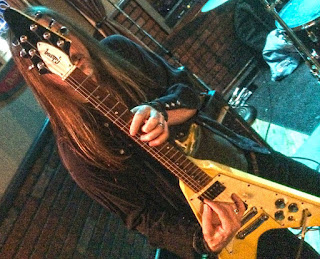 The remake of 'psychomania' ( or better yet, the original, but with my soundtrack! )

Well, trying to get them to expand slightly from what they are used to hearing ( a least when listing to other bands in our similar 'Genre' - Ie: Stoner/ doom etc. We started as a band firmly in that scene, but always aimed to add ellements of other Metal / Hard Rock etc. that nobody seemed to be doing at the time. As much as we all worship Sabbath, There where more than enough band's trying to copY that sound ALREADY.

It's great, but it's also a rare & special occasion when it does happen. It takes alot out of us and unlike some bands that go out & tour night after night, we need time in between gigs to re evaluate, but just not as MUCH as we've waited this time around...
The fan's experience will be only 'Slightly' Painful, hopefully.

Hard to say, but it's more than just a great Riff or words. For me it's usually when you hear a song and it's SO out in left field & original, or it sounds like a song I've written in my head, but nobody has heard. Also the old 'if you are humming it' a few minutes after hearing it, and you don't even realize it.

'M-1' when I was about 12. It sounds remarkably like the songs I write now...So not much has changed, unfortunately. I thought it was a baddass name cuz' M-1 was the name of a rifle, but it really stood for 'Music #1' since it was my 1st  tune. Thats what I wrote on the paper.

The one ya'll haven't heard yet. Also 'Medusa' from the Sunset Soundhouse EP.

ummmm? I'll get back to you on that one.

Vinyl, then digital....CDs just sucked. Always been a vinyl hound & I deal in vintage/ rare LPs and memorabilia for my 'living' ( if you can call it a living ).... SO vinyl has never gone out of my life. Digital is so easy & has changed the way we all listen. Not in a bad way, for me. But its fucked up allot of other peoples musical reality unfortunately. I do feel sorry for this & the future generations that have been born in the 'digital' age.

Neither, believe it or not. Theres actually only one of us in the band that drinks at all anymore, sad but true. And he doesn't even chug much any more...but if asked him, he'd say WHISKEY for sure!

Wombbleton, Rokaway, Record Parlour and of course, Amoeba, although it's so big now that its not at all the same as a little dusty rat-hole shop in the suburbs. But everyone goes there when in town.

Work on new tunes, finish a few 1/2 baked ones & try to record them at the same or better quality as the Sunset Soundhouse Tapes.