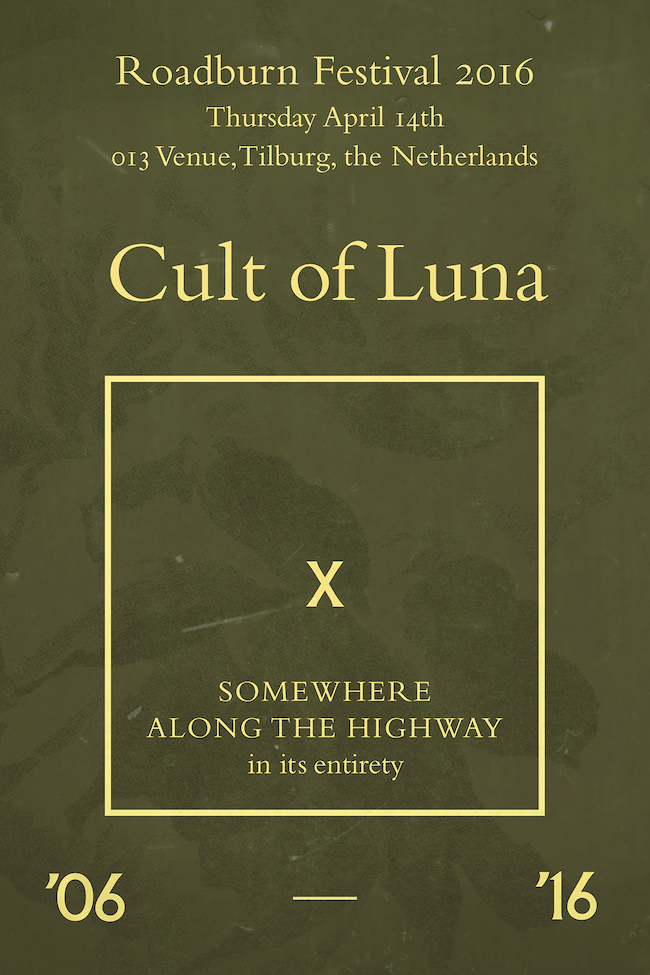 2016 will mark a decade since CULT OF LUNA unleashed Somewhere Along The Highway - catapulting them to the top of end of year lists, and in to prized positions in record collections the world over.

Whilst the last ten years has seen the ascendency of CULT OF LUNA’s star, as well as two further stunning albums, Somewhere Along The Highway remains something of a marker in this history of the band. It seems fitting then, that just a week shy of the album’s official anniversary, CULT OF LUNA will be performing the album in full at the 013 venue on Thursday 14 April 2016.

It’s an honour to welcome back CULT OF LUNA to Roadburn Festival; the threads of their influence are weaved throughout many of the bands that have appeared on our line ups over the years. Join us as we honour the seminal importance of Somewhere Along The Highway, and celebrate all that CULT OF LUNA have achieved since its inception.
To find out more about CULT OF LUNA at Roadburn, click HERE

Joining Pentagram, Galley Beggar and With The Dead at Lee Dorrian's curated events will be three newly added bands. Over a decade after ceasing activities, G.I.S.M. reappear for their first concert ever outside their native Japan - at Roadburn 2016. The absolutely legendary Japanese band embody the true meaning of cult – one of the first acts to bridge the gap between hardcore punk and metal, and in the process redefined danger and unpredictability with violent stage antics and the insane aggression of their music

Lee Dorrian comments: "I thought it was an extremely long shot for many reasons. Mainly because I knew that they had never performed outside of Japan but also, they hadn't even performed a show in Japan for over a decade.  I still can't quite believe that this is actually happening but the flights are booked and they are getting ready to come and boot you so brutally fucking hard in the ass!"

G.I.S.M's Sakevi added: “It’s my pleasure to be involved and to be part of such a cool festival. It’s our first time ever playing outside of Japan, and it will be our fist show at all since February 2002! We’ll be playing a so-called “classic set” - and I’m already looking forward to having a lot of fun at Roadburn.”
To find out more about G.I.S.M click HERE 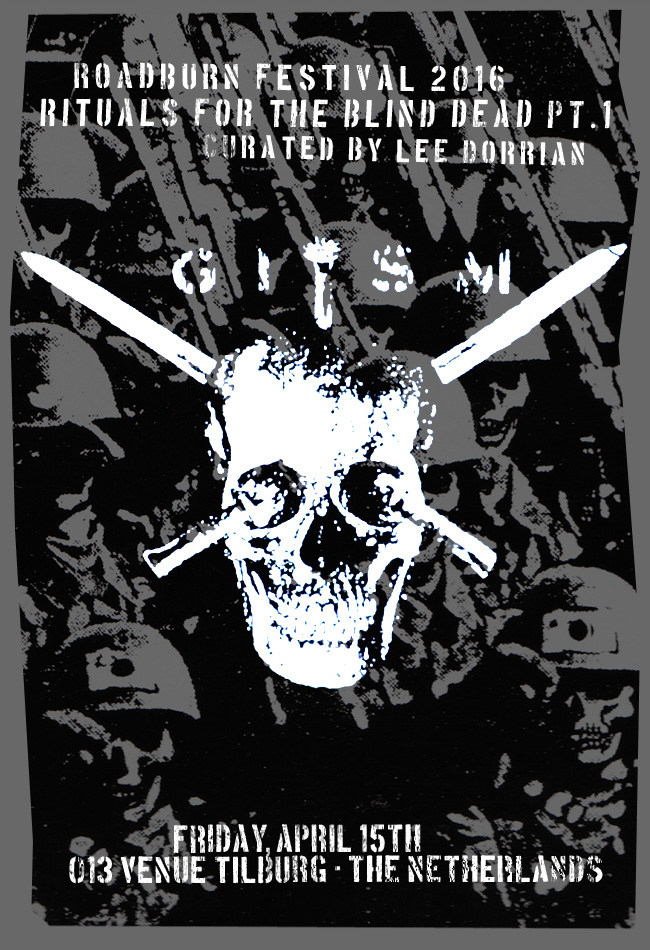 Over 25 years after the release of REPULSION's standalone masterpiece Horrified, still stands as one of the major cornerstones of not only grindcore, but extreme metal as a whole.

Lee Dorrian, a pioneer in the scene himself, says: "The line-up for my curated event is getting more and more exciting as we go along. I can't tell you how happy I am that REPULSION are still playing live and crushing skulls wherever they appear. The legacy of this amazing and extremely influential band continues to grow and spread like wildfire as the years go on. It is a great honour that Matt and Scott accepted my invitation to come and destroy you all at Rituals For the Blind Dead."

The band's tales of witch-cult gatherings in wooded glens, pacts made in torch-lit abbeys and Victorian magic made such a huge impact on Roadburn back in 2011, thus we're spellbound to report that Lee Dorrian has invited BLOOD CEREMONY to return to the 2016 festival on Saturday, April 16 as part of his curated Rituals For The Occult Pt.2 event.
To find out more about BLOOD CEREMONY, click HERE 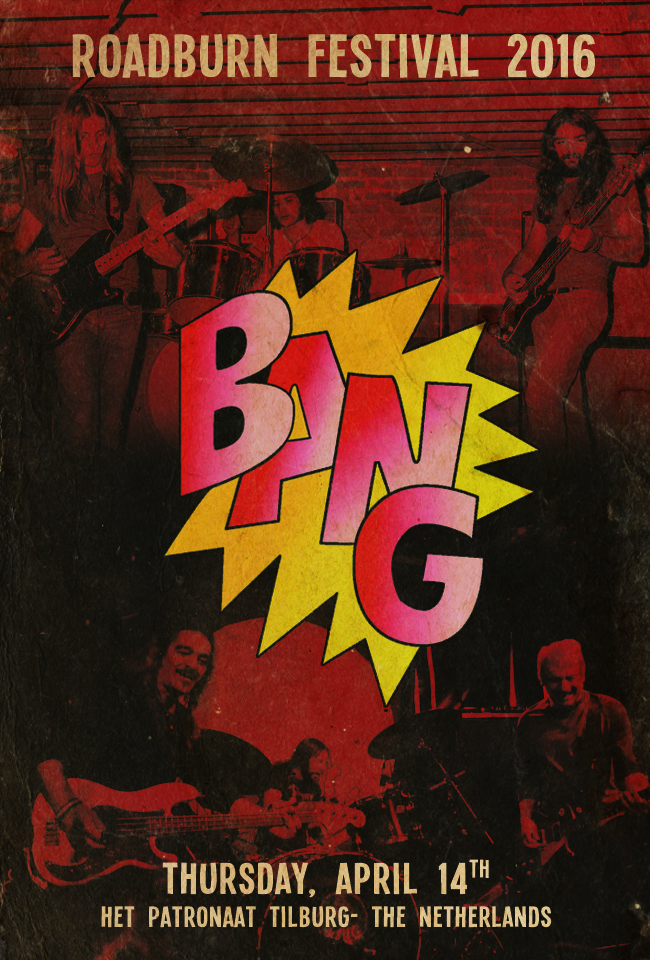 Unsung heroes of the heavy ‘70s may be plenty in number, but few can offer the sweetness of groove that BANG bring to the stage, and we’re thrilled to announce they’ll be playing their very first European show ever at Roadburn 2016!

Says BANG of playing Roadburn, “We are incredibly excited to play Roadburn and for BANG to rock Europe for the first time. We know we have a lot of fans across the pond who are excited as well, and it's going to be amazing to connect to that audience. We even heard they have amps over there that go to 11, so we will be extra loud!”
To find out more about BANG click HERE.

Tickets to Roadburn Festival 2016 are now on sale! Ticket sales got off to an incredible start with many of the available weekend tickets being snapped up within the first few days. There are still 3-day, 4-day, and Sunday tickets on sale. Thursday, Friday, and Saturday day tickets will be released at a a later date.
It is also possible to book camping tickets via Ticketmaster.

Roadburn Festival takes place at the recently upgraded, state of the art 013 venue, Tilburg, The Netherlands, between 14 - 17 April 2016. The line up this year includes Neurosis (30th anniversary), Paradise Lost (performing Gothic in full), curation by Lee Dorrian, Amenra, The Skull, La Muerte, Of The Wand And The Moon, and Green Carnation. For the full line up details, please click HERE.

Email ThisBlogThis!Share to TwitterShare to FacebookShare to Pinterest
Labels: Bang, Behold! The Monolith, blood ceremony, cult of luna, g.i.s.m., galley beggar, hair of the dog, lee dorrian, pentagram, repulsion, roadburn festival 2016, somewhere along the highway, The Body, with the dead