A Ripple Conversation with Eric Knight of Disciples of Babylon 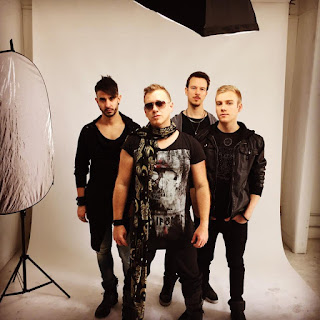 KISS was definitely a defining moment and an epiphany in the sense of that was what I wanted to do with my life. I think it was the visual part with them first how they looked like real life super heroes, the second was when I did start hearing the music and just the simple genius behind those songs.

Also discovering RUSH for the first time was just a mind blowing experience. To hear that kind of musicality yet hear their sense of melody was just something I'll never forget.

In recent years MUSE was probably the last band that blew me away. Matt is just such an amazing talent as well as the band as a whole.  We are trying to strive for that excellence both as songwriters and live performers.

Well the songwriting process for myself or us in the band comes in different ways. Usually me and Ramon will have writing sessions where when we first get started will show each other song ideas or pieces of songs or ideas. Once we hear something that we like will start working on that idea and develop it from there.

What comes first I would say is different each time, lately it's happened where I heard Ramon fooling around with his guitar or he has posted something online while he has been messing with gear and it just sounds amazing so I'll call him immediately and ask him is that something he just came up with or is it somebody else. Once he tells me it was just him playing around I'll tell him we are working on that next. That process has already created two great songs that have come out of that.

I could also bring a vocal line or part for a chorus or verse and we start building from there. The most common way though for us has been just playing ideas for each other and deciding which one we are going to work on and go from there. Lyrics always come last for me.

That's such a big one. There are so many. I grew up in a house where my family was constantly playing music. I was influenced by R&B (Stevie Wonder, Earth Wind & Fire) Pop & Jazz. Then came the lighting bolt with Rock, Hard Rock & Metal. (KISS, the Who, Van Halen, Priest, Maiden etc.)  I would say the biggest influence overall would be the band Journey. Both vocally (Steve Perry is my biggest influence vocally) but also as a band from a writing standpoint they were amazing.


I think there is inspiration everywhere you turn. I find it by people watching, life experience, personal relationships. I think new ideas or new motivation comes from creating new pieces of music. Creating something out of thin air and it turning into a song that people get to enjoy to me is always just an amazing process and feeling when other people benefit from it.


Well we are all from different parts of the world but of course all based in Los Angeles. LA is an interesting animal in the sense that it is so eclectic in terms of the people that live here, the food, lifestyle and of course in the music scene. I think that is why are music in this initial EP is diverse in a lot of ways. We come from different musical backgrounds and upbringing and it reflects in the diversity of our music, style and influence.

Well many many years ago I was just reading different things about the subject of Babylon and it's origins on the internet. And I remember a phrase being used calling the people of Babylon the 'Disciples of Babylon'. I thought it was such a cool phrase that I immediately said I have to tuck this one away in my list of cool names for bands. I thought it would or could be so thought provoking and to some degree it has become that.


Well one of my personal goals is to write and score music for film so you aren't too far off with that. I've done some minor work for some independent projects. But I would love to write music for the Star Wars franchise or any super hero comic book project for either Marvel or DC. I'm a huge fan of comics and sci-fi and I think that would be a dream come true. 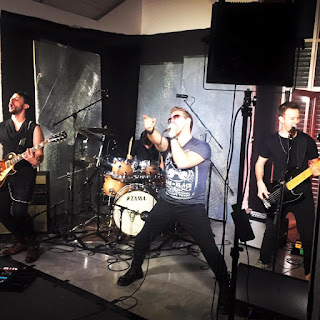 
"A Day in the Life" by. The Beatles. First cause it is such a monumental song off of such a game changing album. And it's just an interesting story of how the song came together from a couple of different stories of articles that John Lennon was reading at the time. So odd and diverse and I would of loved to see what his thought process was creating that piece of music with McCartney


Our intent musically of course is to take our audience on a journey as well as ourselves. We want to evoke various emotions to our audience. Mainly to uplift and inspire but also run through all the other sides of emotions (happiness, sadness) stimulating thought and what could be. All the great bands have managed to capture and express this to their audience, that's what we intend to do.


Well I think some that come to mind are recent ones where it was our opening song and I started singing the lyrics to another one of our songs and just completely wondering what the hell am I thinking. Or when our guitarist Ramon is thinking that are guitars are tuned to one song and we are in another and it goes south in a hurry. Those are hilarious moments to me and us as a band.


Well I think there is no other experience like it on the planet to perform  and play your music for people. It's something that really can't be explained or understood until you do it yourself. It's the biggest adrenaline rush ever. I absolutely live for performing and it sounds like such a cliche but it's true, it's the only time when you can forget about all your problems and worries at the moment. I think that's why people still go out to concerts so much. It's an experience that can't be duplicated any other way only by being there. We want our fans to be part of the live experience and involve them any which way we can.


The music is the foundation of course. It's those successive pattern of notes and combinations of them that connects with the end user the audience. Then of course the other piece of the equation are the lyrics. There has got to be a great story and a chorus that bridges everything together.


Wow that's a good question! I can't even remember the title but I remember it being about a girl in school that I had a crush on. I know it was tragic, haha!


Well I love all the music obviously and proud of all of it (I'm biased of course) but out of this EP I think the track "Arrived" is the standout for me. One was because it was the first song that Ramon and myself wrote together. The other because of it's Epic nature of the way it starts and ends. It's a song that I could here on that next Star Wars or super hero movie for sure!


Well as I mentioned earlier to you I think MUSE's Matt Bellamy is just an amazingly talented individual. Not only proficient on guitars but an amazing pianist and just unbelievable vocalist. Also I think Mike & Ben from Royal Blood are just wonderful. Their songs and sounds are something so refreshing to hear and they definitely are taking it to the next level.


Vinyl all the way! Our bassist Gui just bought a new turntable recently with these mammoth speakers and we are always at his house blasting 'Wings Over America' and just basking in all of it's glory.


Well I'm not the drinker at all in the band so you would have to ask the other guys about that. But being around them long enough now I can say that they are BIG fans of beer!


Well being in LA we are fortunate enough to have Ameoba Music in the heart of Hollywood. If you know Ameoba you are in Vinyl and music Utopia.


Well the plan is to support this initial EP for the better part of 2016 touring and in the process we have been writing for a new record that we will hopefully be in the studio by the middle of 2016 recording.


Well we hope that your readers will check us out and see what we are all about. We also would like to thank Ripple Music for their support of the band. Cheers!