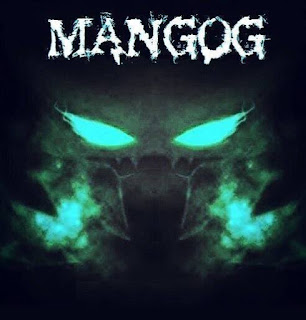 Mangog from Baltimore, MD, has not been around for a very long time but are already causing waves with their, do I dare say it, odd take on Maryland doom. Full of slow, heavy riffs, the band plays in weird time signatures and instead of the traditional occult and God fearing themes, Mangog paints a very bleak and apocalyptic picture of a world heading for total destruction.

Formed by bassist Bert Hall when both Revelation and Against Nature went on indefinite/permanent hiatus. He switched to guitar and vocals and after some shuffling around, finally had assembled a full line up in singer Myke Wells of Final Answer, Darby Cox on bass guitar of Major Company and Mike Rix on drums formerly of Iron Man. Not resting on their laurels, they hit the studio and recorded the amazing EP, ‘Daydreams Within Nightmares’.

An eerie and haunting riff accompanies Bert as he starts off opener ‘Ab Intra’. His beautiful, almost spoken singing brings out the despair that oozes from the song. Dejected, misled, lied to and full of misconceptions about yourself, I have never come across where a song title has been so true to the contents. This latin phrase means ‘from within’ and as soul searching as this track is, Mangog couldn’t be more spot on. About 1.45 minutes in, the rest of the band joins in, pounding me into the ground, while creating claustrophobic and paranoiac atmospheres. Eventually Myke Wells takes over on vocals and man, what a singer he is! Continuing where Bert left off, he elegantly adds several measures to an already fantastic creation. All of a sudden Darby fires off some badass bass riffs as Rix crushes it on the drums to allow Bert to shred a beautiful solo. 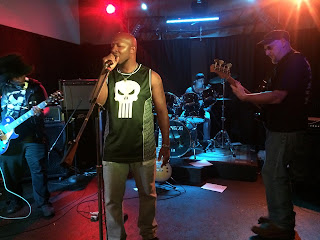 The title track follows and gets right in my face. Not wanting to give any respite Mangog pulls me apart with their doom-laden apocalyptic visions. Definitely based on traditional doom, the pace has been brought up a notch or two as well as some odd tempo changes, which takes the band out of the confines of what a genre should be like. Absolutely love it! I mean, the guys do exactly what they want and they aren’t afraid to take risks and that’s how it should be. Do what you want because, as in the case of Mangog, the end-result is bar to none! ‘Of Your Deceit’ ends this amazing debut. Slow, crawling and haunting, Bert is back on vocals and holy hell people, I don’t know how these guys do it. But this is so good. I can feel the walls closing in on me the more I learn how I’ve been mistreated and lied to by someone very close. This knowledge, accompanied by the anger building up, eventually turns into the perfect catharsis, the perfect release, as I cut this person from my life. It might not feel that way at first, but as the song progresses all the negativity within changes around and I am finally free…or am I???

Dear waveriders, what can I say? Mangog are a new force to be reckoned with and I implore you to check them out. Bringing a whole new take on a genre that I love, but that has gone stale somewhat, the band has turned doom on it’s head, and then some. The songs are complex in their structure as well as in the performance, but somehow, they flow so perfectly and with such ease that I’m lost for words.

I simply can’t stress how damned great Mangog are without repeating myself over and over again. So I’ll end here by imploring you all…get your hands on this EP! Get in touch with the band and help get their name out there. This is music way too good to be ignored.

Mike Rix (Mangog) said…
Thank you for the great review, we are truly humbled \m/