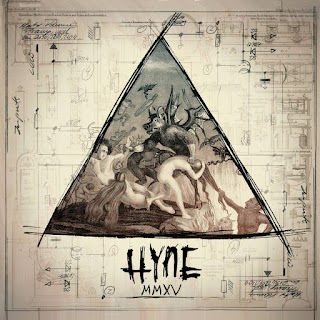 Hamburg, Germany’s own Hyne flame hot off the heels of their impressive sophomore album Elements with more crunchy riffs and melodic vocal chops and an added bonus of IT! Yes, Hyne may be an under-known band to many, but one listen to the incredibly high octane and infectious melody with heavy emphasis on modern progressive blues rock, you’ll understand the band has the IT factor. I absolutely raved about Elements in 2014 on the short lived Grip of Delusion Radio blog and MMXV (2015) is equally as impressive, if not more stellar. Only a couple listens in so far I am already finding more to love on each listen. 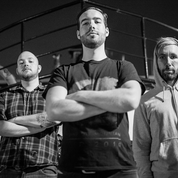 For fans of hypnotic groove and raging vocal harmonies, Hyne are the complete package. Ultra accessible on all fronts, nothing overly aggressive, nor anything monotonously slow or plodding, the energy maintains an explosive volume summoning a raised fists attitude and mandatory perma-smiles galore.

Precision fuzz distorts the airwaves with a steady groove of bluesy solos and gargantuan choruses, while the polished vocals radiate the mind with euphoria. The vocals soar like an eagle spawned by James Hetfield and John Garcia. Yep, gay bird vocalists made a love child. Sorry, I've been accused of randomly referencing birds in my music reviews and couldn't resist, as corny as it may sound. Birds eat corn right? 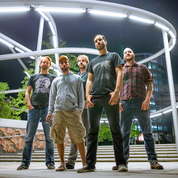 Anyway, I have been waiting for a follow up to Elements since it played on steady repeat back in 2014, and all of my high expectations have been exceeded in 2015, a year later. If I couldn’t convince you then, well I’ll try again to get you into this band. Theatric atmosphere, outstanding production, and super catchy hooks combine to create a phenomenal rock n’ roll album. The standout vocals are mixed in just right to let them shine above the rippling bass and blazing riffs. The boys in Hyne should be damn proud. Order the vinyl, digital, CD, send the band love notes and messages of praise because they deserve some recognition for MMXV as well as Elements and their debut album 3000. No slump here that's for sure. Album goes live October XVI, MMXV. Pre-order today at bandcamp below and check out their website if that’s your thing.