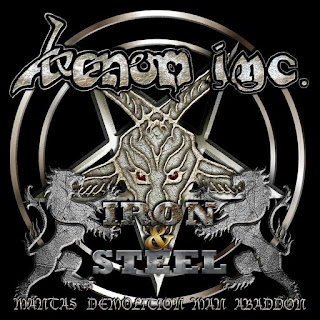 How many of you Waveriders love the Prime Evil era of Venom? By that I mean Prime Evil, Temples of Ice and the Wastelands? It was a period in Venom's history that still has die-hard (pun intended) fans divided.  Cronos was gone – Atomkraft bassist/throater Tony “Demolition Man” Dolan stepped in and more than filled his shoes.  With Demolition Man the band were headed in a more - dare I say it – melodic direction which pissed off loyal fans.  Of course we all know the “classic” line up reunited a few years later, then “Boys will be Boys” as they say.  Cronos still fronts Venom – Guitarist Jeff “Mantas” Dunn and Demolition Man formed their own band “M:Pire of Evil” and played Venom nuggets in their set mixed in with originals.

Then in 2015, Drummer Tony “Abaddon” Bray joined M:Pire onstage at Keep it True and Announced “Oh yeah all three of us are in a band now!!” Evil laughter...

Cronos shot his mouth off in the press, but, to their credit, the Venom Inc. boys have been nothing but gentlemen about the whole situation.  Two different bands both playing tribute to the monolith that is Venom.  Let the fans decide who the superior act is!!

You can read my interview with the lovely Mr Abaddon here.

I'm currently working on an interview with both Demotion Man and Mantas which will be published right here when it is done.

After the press release from the band's own website, please enjoy the promo video the band made in anticipation of their journey to entertain the metal masses in Asia!!

After more than 20 years and for reasons that will become apparent, along with repeated fan requests, we introduce …

Following on from the much acclaimed Prime Evil album era and in the great tradition of VENOM, the three protagonists continue to brew the cauldron......

MANTAS – THE DEMOLITION MAN – ABADDON
Are BACK!

With a launch appearance at the highly respected 'Keep It True festival' in April, followed by live dates in China, Japan and Taiwan in July, a full European tour in September… and a full South American tour as well as festival appearances and North American dates planned.... with a FULL and CLASSIC VENOM set.

Followed by a brand NEW album

This absolute powerhouse of metal are set to bring you all that was/is and will be Venomously brutal and exciting. It is time to set the record straight and give back what was lost.
Welcome to the beginning of the end....!!