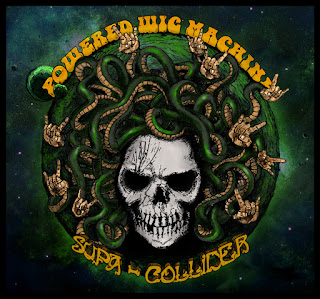 I have a startling confession to make:  I haven’t been listening to much music on vinyl lately.  I know, I know...blasphemy around Ripple HQ.  Stone me.  Spotify is just real convenient...and we can have that argument somewhere else.  However, Wayne from Powered Wig Machine asked me if I’d like a copy their record on vinyl for review purposes and the only answer there is...duh, yes.  The fact of the matter is that I have record player envy right now and would really like to get a new player.   However, with the pressure on, I HAD to give their new release, Supa-Collider, a proper spin, right?  Duh, yes.  Call it a much needed slump buster.

Powered Wig Machine hails from the arid state of Arizona, so when they say they are ‘Desert Rock’, they fucking mean it.  No European stylists without the regionality (spell check says I made that word up, deal with it) or street cred here, PWM is the real deal in that department with all of the thick and fuzzy riffs to prove it.  Propelled by brothers Wayne and Joseph Ruddell on guitar and bass, respectively, these dudes bring the heavy and bring it hard.

First off, it used to be a generally accepted fact that I’m not a big metal head.  Good thing too.  PWM is straight up rock.  No metal posturing to be had.  Well...maybe they are metal in the sense that Zeppelin and Sabbath are metal...but no palm muting and guttural vocals are to be had here.  The vocals are sung, not screamed, thank goodness.  That gets real old real fast.  They are catchy too.  You’ll find yourself singing right along with their strong hooks.  The hooks really are PWM’s strength at the end of the day.  Every song comes around nicely.  Around here, we call that songwriting.  A lot of stoner/desert bands forget that aspect.  Young bands getting into the genre should take note.

Most ‘stoner’ or ‘desert rock’ bands can’t get past using generic sounding riffs...and, look, that’s just the genre.  I have grown to accept that.  I also don’t listen to much of the genre anymore for that reason.  PWM skirts past that trap.  It’s safe to say that they have a ‘classic’ desert/stoner sound...in all the right places.  If I had to compare their sound to bands that you might know, I picked up Clutch, QOTSA, and Unida, but really, they are doing their own thing and doing it well.  Hell, there are even some real deal heroic guitar solos to boot.  These songs would sound real bad ass pumping out of your boogie van or Impala at 100 MPH.  Smoke ‘em if you got ‘em.

To top it off, the packaging of the record is pristine.  Supa-Collider can boast of killer artwork. a gatefold cover, and a real cool green splatter vinyl platter.  Bonus points for printing the lyrics on the inside cover, not to mention the cool little comic to compliment their music video release.  Supa-Collider is a top notch record with pristine production all of the way around.  Without a single track in the ‘let down’ column, there is no reason why you shouldn’t add it to your collection.
Written by:  Ian Gerber on his fancy computer