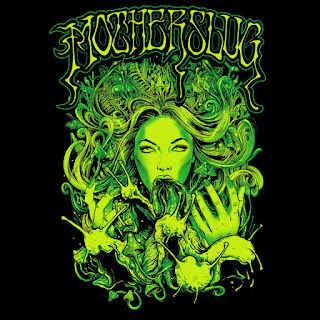 If you like your sludge so steamy and thick that it can suspend humid droplets of dew in midair, have I got a release for you.

The debut album from new heavy label NoSlip Records features the debut long-player from Melbourne Australia's, five-headed monster of doom, Motherslug.  Bringing a low end that can only be measured on the Richter scale, vocals that bubble out of the larynx like a creature from the swamp and guitars that sear through the swampy haze, Motherslug pulled out all the stops on this album.  Inspired by Kyuss, Sabbath, and Electric Wizard amongst others, Motherslug still manage to sound completely like themselves in the crowded world of underground doom.

In essence, everything you need to know about the bands sound is right there in their name.  Motherslug.  Slug referencing the moist and slimy riffs that crawl out of the speakers in no hurry whatsoever.  Merely taking their time to ooze across your eardrums, in no hurry to eat into your brain.  And Mother, because these four guys and one woman simply bring on the mother of all heaviness.

Now, I'm prepared to get flamed for this, but I've never been a fan of Sleep.  Blasphemy, I know.  But for you waveriders who know me, you know I need a little energy in my riffing, I need a fat and thick groove, I need some rock injected into the morass of doom.  And Motherslug do that just fine.  Never losing themselves in a muddle of drudgery and a quagmire of simple thudding, Motherslug keep the melodies and guitar work inspired enough to keep me interested and bring enough pure rock to the sonic sludge to give it a pulse.  They slow it down -- way down-- at times, but never forget that to capture the swamp storm of lighting to fire the monster back to life.

Second cut on side one, "Rollin'" is a perfect example of this.  Earlier in the day, I'd been listening to SuperGiant and their killer album Pistol Star, and I was thinking just how perfectly those boys managed to bring on the fattness without getting trudging.  "Rollin'" is cut from the same sonic cloth.  Heavy as shit, but it's got a groove that keeps the pulse moving.  Cheers to Cyn on bass for anchoring this onslaught, while Cam's vocals gurgle with the perfect tone of throatiness and phlegm.  The midsong breakdown plays with dynamics and hypnotic states enough to give you time to light up another bowl, before the badass groove digs back in.  Simply put , this is a killer cut.

That doesn't mean Motherslug keeps it rockin' all the time.  "Trippin' on Evil" brings in the Sleep influence big time, slowing it all way down to the teutonic pace.  But here it works as a contrast to the more fiery cuts.  I've been to Australia before and don't recall there being any swamps in the Melbourne area, but somehow Motherslug managed to find one.  Or create one in their studio.  A thick, green swamp of humid, dripping riffs. The prolonged, one-note bass solo on Space man, brings to my mind the visual of the swamp creature pulling himself out of the muck and mire and preparing himself to terrorize an unsuspecting hamlet.

NoSlip put out this baby on beautiful translucent wax (the band edition) and two other special editions, and as you can see, the cover art is gorgeous. Overall a great package that no fan of the heavy should pass up.  Cheers to all involved.