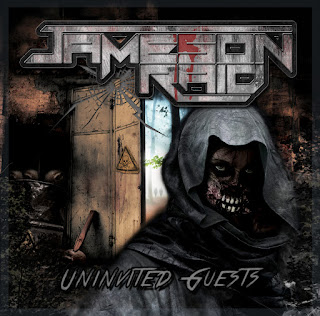 According to Wikipedia, the Jameson Raid of 1895-1896 was a botched raid on the Transvaal Republic carried out by a British colonial statesman Leander Starr Jameson and his Company mercenaries...sort of like the US led “Bay of Pigs” Invasion of 1961.  (Learn some history people! Google that shit!)  So basically a British band naming themselves after an event that could only be considered a blot on their country's history?  Gotta give them mad props for not using the terms “Death”, “Metal”, “Silver”, or “Blood” in their name and going for something incredibly original.  According to singer Terry Dark, “the band was first called Spectate 2...(look twice).  Not very Metal...One of our road crew heard the story of the Raid in school and thought it would make a good band name...we agreed...”

Birmingham based Jameson Raid released their first EP/single, “The Seven days of Splendor” in 1979, right in the heart of the burgeoning New Wave of British Heavy Metal movement that I love so much.  In fact, EMI included a song of theirs, “Hard Lines” on the Metal for Muthas II compilation in 1980 (crediting the band as “The Raid"), alongside such artists as Dark Star, Chevy, Trespass and White Spirit.  The band released another EP in 1980, the prophetically titled “End of Part One” before eventually fizzling out.

In 2010, like so many other bands of the era, the band regrouped.  They released,“Just as the Dust Had Settled” a collection of songs from the band's back catalog on Shadow Kingdom Records.

“Uninvited Guests” is the band's first full length of all new material.  The term “traditional British metal” gets bantered around a lot, but in this case it's a compliment of the highest order.  There is something very British in Jameson Raid's sound, from the twin guitar leads, to Terry Dark's voice which reminds me of a lower register Biff Byford (and a bit like my dear, late friend Terry Jones of Pagan Altar), to Pete Green's Steve Harris-like bass runs in “Metal People” (I know a Rickenbacker when I hear one!) and of course the driving double kick drums throughout the album.

I honestly can say every song on the album has it's own unique sound.  There are the upbeat fist pumping rockers, Like “Metal People”, slower, doomy songs like “Breaking Point”, and mid-paced songs like “9 reasons” (my favorite track on first listen to the album).

Jameson Raid's “Uninvited Guests” is 56 minutes of well-crafted, expertly played metal music, as modern sounding as anything “the kids” are putting out these days.  In fact, young musicians could learn a lot from Jameson Raid- still flying the flag for British metal!