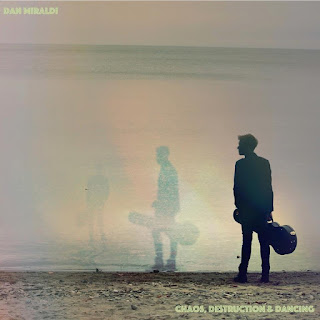 Greetings waveriders!  Today I've been afforded the opportunity to tell you about the brand spanking new release from Dan Miraldi, an artist I've had the privilege of following since I began writing for The Ripple Effect.  The name of the album is Chaos, Destruction & Dancing and I think it is superb!  If you have been searching for extraordinary pop/rock music that hearkens back to an earlier musical age you've hit the jackpot!

Dan Miraldi is a young man.  He is a young man with an old soul.  This old soul guides his musical creations, producing songs that successfully iterate on proven sounds while adding more modern trappings.  The end result is nothing short of aural magic!  Is it rock 'n' roll?  Absolutely!  Is it power pop?  Oh yeah!  Can you hear elements of punk rock, folk rock, and synth pop?  You know it!  C,D&D is an album that can bring together combative musical curmudgeons of all ages and give them all something to shout about.  What makes me so confident in my appraisal?  I'll tell you.

Let's analyze some of the direct musical references that pop into my head when listening to a few of C,D&D's songs.  Why not start with album opener "Demon Baby"?  This track would feel right at home on a Television album, especially considering how much Mr. Miraldi's voice sounds like Tom Verlaine here.  Television a little dated for your musical leanings?  That's cool.  "Junkie Friend", the second song on the album, has a main guitar riff that explores similar territory to Modest Mouse's well-loved single "Float On".  How about a 1980's reference point?  No problem!  "Parallel Universe" is synth pop to a tee, and "I Gotta Figure Out How" has keys reminiscent of Dire Straits.  The kicker is that what I've outlined is only scratching the surface!

As I alluded to earlier one of the highest compliments I can offer Dan Miraldi is that he takes all of these vintage as well as modern reference points and creates songs that are entirely his own.  He is not directly lifting ideas from the past, only using them as solid foundations which he then builds upon.  While this quality was evident in his work five years ago when I first listened to him, the songs on C,D&D take this approach and hone it to a razor sharp edge.  This is a singer/songwriter who has reached full maturity and we are all beneficiaries of the resultant musical output.

Start to finish Chaos, Destruction & Dancing by Dan Miraldi is a marvelous album!  You need this music in your lives waveriders!  Pick up a copy when it releases 8/4/2015.

PS: My favorite track off the record is "Perpetual Outsider".  Hmmm?  I wonder why?