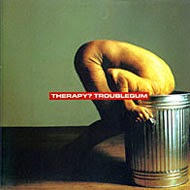 I got hooked on these Northern Irish pain merchants when their album 'Nurse' hit the streets in 1992. A strange feat indeed since I, at the time, had barely ventured into the realm of heavy, noisey and industrial-tinged punk at all. Come to think of it, I never have since either really. However, 'Nurse' brought something else to the fray that appealed to me and I have been a fan of the band ever since. If that album got me into the band, the 1994 follow-up, 'Troublegum' totally blew me away and became an important staple in the soundtrack of my college years. 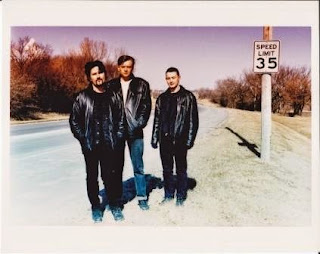 Other very, very goods songs are 'Hellybelly', 'Stop It, You're Killing Me', 'Die Laughing' and an amazing rendition of Joy Division's 'Isolation'. They all follow perfectly with this album's theme of portraying the wretched souls in society, after all their website greeting is 'We Are Therapy? Helping The Afflicted Since 1990. They are also bringing forth acts of shallowness in the name of want and greed. Although released in 1994 these themes are more poignant than ever nowadays. Timelessness, indeed for better or worse.

The nucleus of Cairns and McKeegan are still keeping Therapy? going after Fyfe Ewing left in 1996, some time after 'Infernal Love', the follow-up to 'Troublegum', had been released. The success sales-wise of this particular album has never been matched, but the band has never given up. And they are still making great twisted music. Check them out, you hear!

godofcyanide said…
I also first got into Therapy? with "Nurse" and I have a hard time choosing between it and "Troublegum" as my favorite of their albums. I have the two albums after "Troublegum," but I gotta say they don't come close to the same consistent level of ferocity and awesomeness of the first two albums.
May 31, 2015 at 12:32 PM