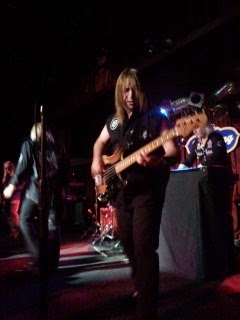 You always remember your first concert, for better or worse.  My first major event (not including local hair metal bands in neighborhood bars) was U2 at Yankees Stadium in 1992.  My best friend at the time's husband scored a dozen free tickets from his job.  I was the only one into the show, everyone else cared more about getting stoned or in my friends case, ducking under the seats for...various reasons.
You also always remember the one concert that completely blew you away.  Up until 2012, the title holder for that spot would have been Marillion in Poughkeepsie, New York in 1995.  It was the first time I had traveled outside New York City for a band, I was on my own, and by the end of the night, everyone in the balcony with me was my best friend.  In all the concerts I've been to since then, and there have been some amazing ones, nothing blew me away like the Uriah Heep show.
Someone I used to be friends with runs a heavy metal website and gives away tickets to New York City shows, and I noticed he had a contest for Uriah Heep Tickets.  I hadn't had a night out in awhile, my area was just recovering from the devastating effects of Hurricane Sandy, and I hadn't been in the mood to party.  But when KP posted the ticket giveaway on his website, I chimed in with a request, and even the day of the show I was thinking of blowing it off.  The subways were still messed up.  Why was I going to schlep all the way out to Times Square to see a bunch of old men in bell bottoms and caftans play songs they wrote before I was born?
My friend Lerxst (another contest winner) and I walked into BB Kings about 40 minutes before the show was due to start.  There weren't many people around.  It wasn't a ghost town, but it wasn't the shoulder-to-shoulder crowd I was used to at that venue.  Lerxst optioned to sit at a table at the side of the stage and we ordered drinks.  This is where it gets fuzzy.  I asked for a jack and coke, and the waiter said “Single or double?”  I remember saying, “Double? I can't drink a double!” but that must have been what I was served.  Twice.  So needless to say when the band hit the stage I was in a very good mood.
A few dozen people lined the front of the stage, and I took my usual spot at gigs, right in front of the bass rig  Most of the crowd hung back even when the entrance music ended and the band came out.  As soon as they started the first notes of “Against the Odds” my jaw hit the floor and stayed there for the next 90 minutes.  These weren't feeble old men teetering onstage and running behind amps between songs for hits from oxygen tanks..  This was a group of five extremely talented, seasoned musicians playing their hearts out for their assembled fans and loving every second of it.
For me, the crowd around me can make or break a concert.  If I'm at a show and people are standing around with their arms folded, or constantly looking at their phones, I'm not going to enjoy myself as much.  This was not the case at this show.  Everyone around me was smiling, singing along, clapping and generally going apeshit.  I was pleasantly surprised because, pushing 40, Abe and I were among the youngest in the crowd. After the first song, my friend KP came over and told us that the sound was better on the other side, by guitarist Mick Box.  Abe followed him over there, saying he needed to hear more than just the bass!!  This was not a problem for me.  One thing I knew about the band before coming out was they had bassist Trevor Bolder with them, whom I remembered as being in David Bowie's band the Spiders from Mars.  I had no idea how long he'd been with Uriah Heep but halfway through the first song, I had a new bass hero (sorry Chris Squire).  In my tipsy state I tried to snap a few photos with my smartphone which at that point was running on about 2% battery power.  I got some great shots of mike stands and the back of  people's heads, and two really good shots of the bass player.  Actually, thinking back, whenever Trevor saw me holding my phone up, he came over and waited patiently while I took the shot!!  Or maybe I imagined that, as I said, two double JD's and cokes for a lightweight like me made my head spin.  I remember someone coming over to me, concerned, saying “You realize you are standing directly in front of the bass amp!!  That's got to be loud!!”  “This is nothing!” I told him, “It's not like it's Lemmy!”

I started talking to a lovely woman and her niece who planted themselves next to me.  They were telling me song titles and band member's names so I wasn't completely clueless.  “I only know 'Easy Living'”, I said more than once.  My ignorance of the band's catalog was a non-issue because their songs are catchy and very crowd-friendly and I found myself singing along to songs I had never heard before in my life.
The singer, Bernie Shaw, came over to us and explained they usually bring girls onstage to head bang and dance for the next song.  I shook my head but wished my new friends well as they gleefully hopped up onstage.  “OH no, if we're going up here so are you Missy!!” They told me, and pulled me by the arms up onstage to dance for “Free and Easy”. I wanted to make a run back to the anonymity of the crowd,  but I turned around and keyboardist Phil Lanzon must have seen the panic in my eyes, so he gave me the thumbs up sign.  That was all the encouragement I needed and started some old school 80's thrash-style hair swinging.  Thankfully the song was short, and as I walked off, red faced,  Trevor thanked me!!   I gotta admit, being onstage at BB Kings is a pretty big deal and I had the presence of mind to snap a photo from behind Bernie!!
The last song was the one I had been waiting for “Easy Living” and whatever semblance of neatness my once well-combed hair had was shot to hell as I swung  it around and sang along happily.
After the band left the stage, Lerxst found me and said he was splitting, he had to catch a train.  He was grinning from ear to ear and told me he had an awesome time and thanked me for tipping him off about the show.
I joined the two dozen or so people waiting by the stage door for the band to come out  Along came a nice Norwegian couple who had been fans of the band for years.  I handed them the copy of the set list I had swiped off the stage that I had thought of getting signed.  The girl was a little tipsy and kept telling me we should show our boobs to get backstage.  A few of the other girls hanging around heard her and said “We can't do this, we're with our dad!!!”.  Eventually, after blowing smoke from her one-hitter in my face, they took off and promised to look for me at the next show.
After about a half hour, the band came out – I made a drunken spectacle of myself in front of Trevor and I think he slipped in the puddle of drool I was making.  I don't even remember what I said to him but I ended up with a guitar pick (even though he used his fingers the whole show) and a couple of photos where I look absolutely hammered.
My friend of the website KP came back and ushered me backstage as long as I promised to behave myself.  I made a point of telling everyone in the band that this was my first show and would not be my last!!!  I think I insulted Bernie Shaw by accidentally saying he was American! (sorry Bernie!) But he took it upon himself to fill me with the complete history of UH singers and I could tell how, even after being the longest serving vocalist to date, he was very proud to be in such esteemed company.
Phil Lanzon overheard me say to someone I was from Brighton Beach in Brooklyn and he asked if I minded talking about the hurricane as they'd seen my area on the news in England!! As I recounted everything that happened in the past few weeks, his face just dropped more and more and I could tell he was genuinely upset.  I explained to him that I needed a night out to get my mind off of everything that was going on around me and he said he appreciated that I picked his band to pull me up.
Eventually the tour manager announced the bus was parked outside and waiting for them, so KP and I said our goodbyes, and we'd see them next year.  Then we wearily made our way to the subway.

Of course things took a strange turn.  The band didn't come back to the states in 2013, and Trevor Bolder passed away in May of that year from Pancreatic Cancer.  2014 didn't see the band back on US soil either, but they're on their way back!! I'm looking forward to seeing Uriah Heep in a few weeks – it will be bittersweet without Trevor to worship – but at least this time I'll know most of the songs!!