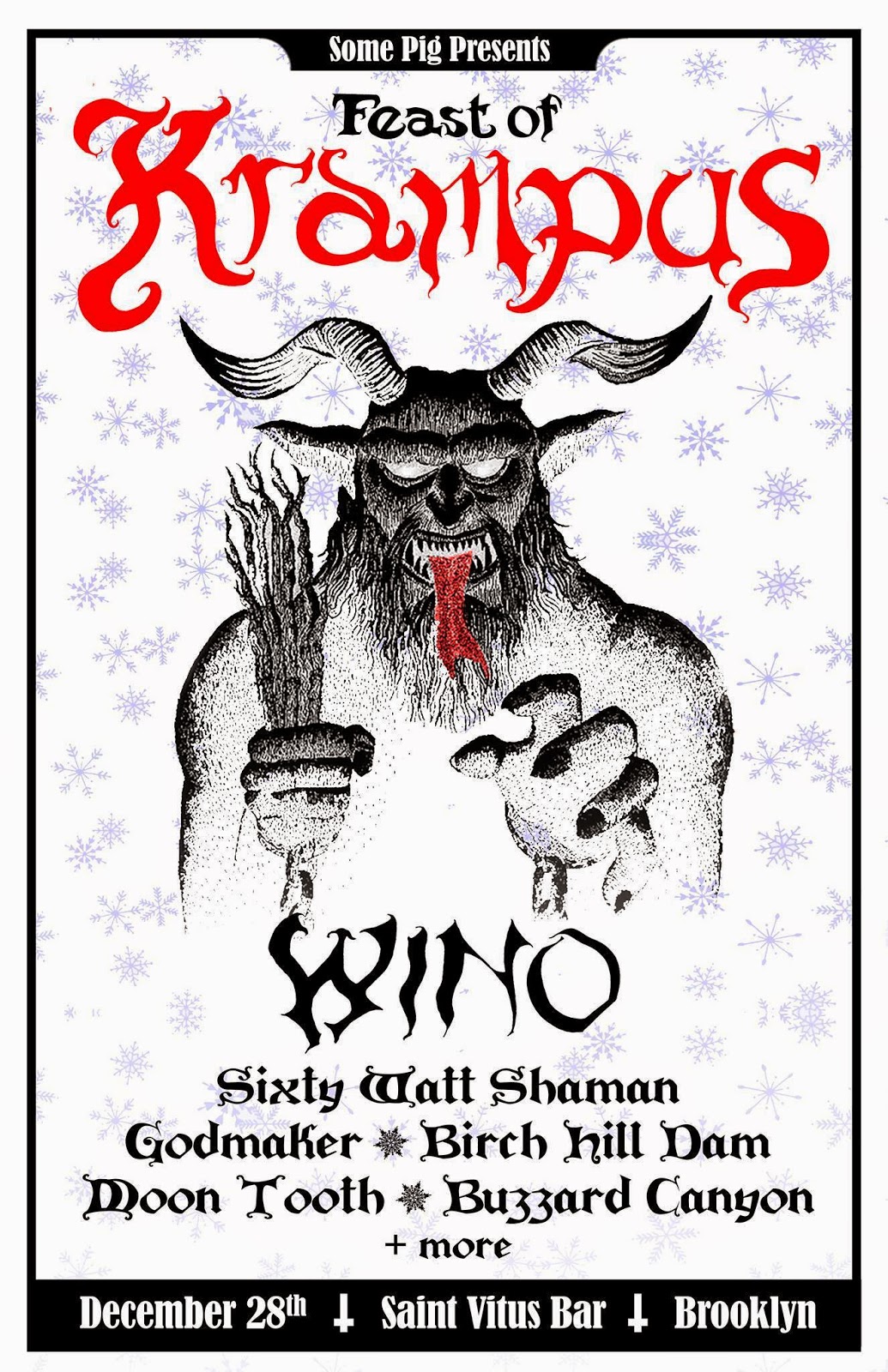 If only everything could be this easy. I get an email asking if I want to review a show at Brooklyn's Saint Vitus Bar on Sunday December 28. The show's being billed as The Feast Of Krampus. I have no clue who or what Krampus is but am thrilled to discover he's a horned beast that punishes naughty children during the Christmas season. Wino's playing and the re-formed 60 Watt Shaman is also on the bill. After a month of being bombarded with Christmas music at home I was more than ready to hit the town and hear some loud rock.
The G train used to be one of New York's absolute worst subway lines but in recent years it has greatly improved. I hit my local platform, 7th Ave in Park Slope, at 8PM just as a G train was pulling out. Normally it would be a 30 minute wait for the next one on a Sunday night but 10 minutes later another came rolling in and took me straight to Greenpoint Ave without the usual weekend shuttle bus transfer nightmare. Thank you MTA for once! Godmaker hit the stage just as I was getting my first beer and I was thrilled to see full stacks on stage. Their 30 minute set was slow, hard and dirty. One of the guitarists employed some actual B.B. King style vibrato during a solo which made me very happy.
Godmaker at Saint Vitus 12/28/14

Next up was the band most of the crowd was excited to see, Maryland's 60 Watt Shaman. I've heard the name for years but never heard any of their music before this show. They're often compared to Clutch and Kyuss. As they started setting up on stage I could tell these were a bunch of dudes that liked to drink beer and listen to Robin Trower live tapes. Once they started jamming they did not disappoint. Heavy, mid-tempo noggin rockers. One after the other. Sometimes the singer also played guitar to get into some Thin Lizzy territory, sometimes it was just the lone guitarist getting all Michael Bloomfield on his Telecaster. Great rhythm section, too. I need to go back and check out their albums from 10+ years ago and see what I've been missing.
60 Watt Shaman at Saint Vitus 12/28/14

Wrapping up the night was the legendary Wino. I got a chance to speak briefly to Wino earlier in the night who explained his band Spirit Caravan was originally supposed to play. Rather than cancel he just decided to play solo acoustic. Full disclosure, I'm not a big fan of solo acoustic performances but it's Wino after all so I gave it a shot. He certainly can play and he's written some great songs but as it approached midnight on Sunday I had to bail to the pulls of reality.
Wino at Saint Vitus 12/28/14


Overall it was a great night and it's always fun to be in Saint Vitus. A lot of people compare it to the old L'amours club but it's really nothing like it. The shows are a lot earlier, not as loud and everyone is more polite but metal is still metal. It's always great to be a part of it here in Brooklyn.
- Woody
Posted by The Ripple Effect at 12:30 AM