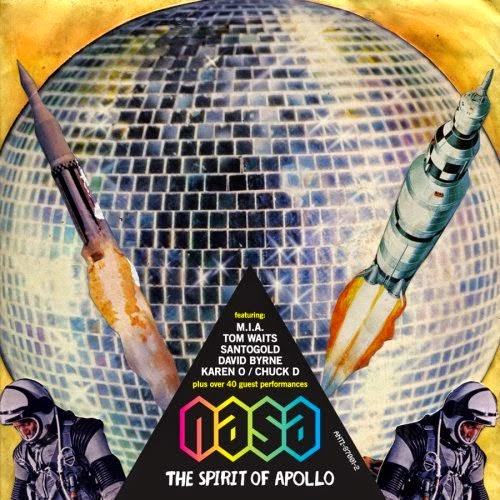 Hello waveriders!  Take a trip with me back to February, 2009.  There I was leafing through the newly released music one Tuesday morning when I came across something unexpected and unknown.  I held a CD in my hand with cover art depicting two enormous rockets lifting off in front of a massive disco ball.  What really drew my attention however was the large triangular sticker affixed to the plastic wrapper.  It informed me that this album I'd never heard of featured M.I.A., Tom Waits, Santogold, David Byrne, Karen O / Chuck D, and over 40 guest performances.

Wait, what?!?!  What album is this?  The Spirit Of Apollo by some group called N.A.S.A..  Who the heck is N.A.S.A., and who in the world are the other guest performers?  I flipped the CD over in my hands and ran through the track list.  The first song featured Chali 2na, Gift of Gab, Z-Trip and the aforementioned David Byrne.  The second track has Chuck D, Seu Jorge, and Ras Congo.  Next up is a track with Method Man, E-40, and DJ Swamp.  At this point my eyes began skipping around.  I saw the names George Clinton, Kool Keith, John Frusciante, KRS- One, Fatlip, Kanye West, RZA, Del the Funkee Homosapien, Ghostface Killah, Scarface, and Ol' Dirty Bastard.  That's insane!  And that's not even the entire guest list!

If you couldn't guess TSOA is a hip-hop album.  N.A.S.A. stands for North America/South America, a fitting name for a group made up of Los Angeles based producer Squeak E. Clean and Brazilian producer DJ Zegon.  I have discovered that the idea behind this music was to bring together artists and musicians from different genres, countries, races, etc. in order to show how easily the boundaries between people can be eliminated.  Unity of the human race.  That's very admirable, but I wouldn't find it as interesting if the music were not to my liking.  Good thing this album delivers such a great listen!

Waveriders, if you're looking for something musically interesting to dig your teeth into I strongly recommend The Spirit Of Apollo.  Beware of excessive head bobbing however.  The grooves can be mighty strong!