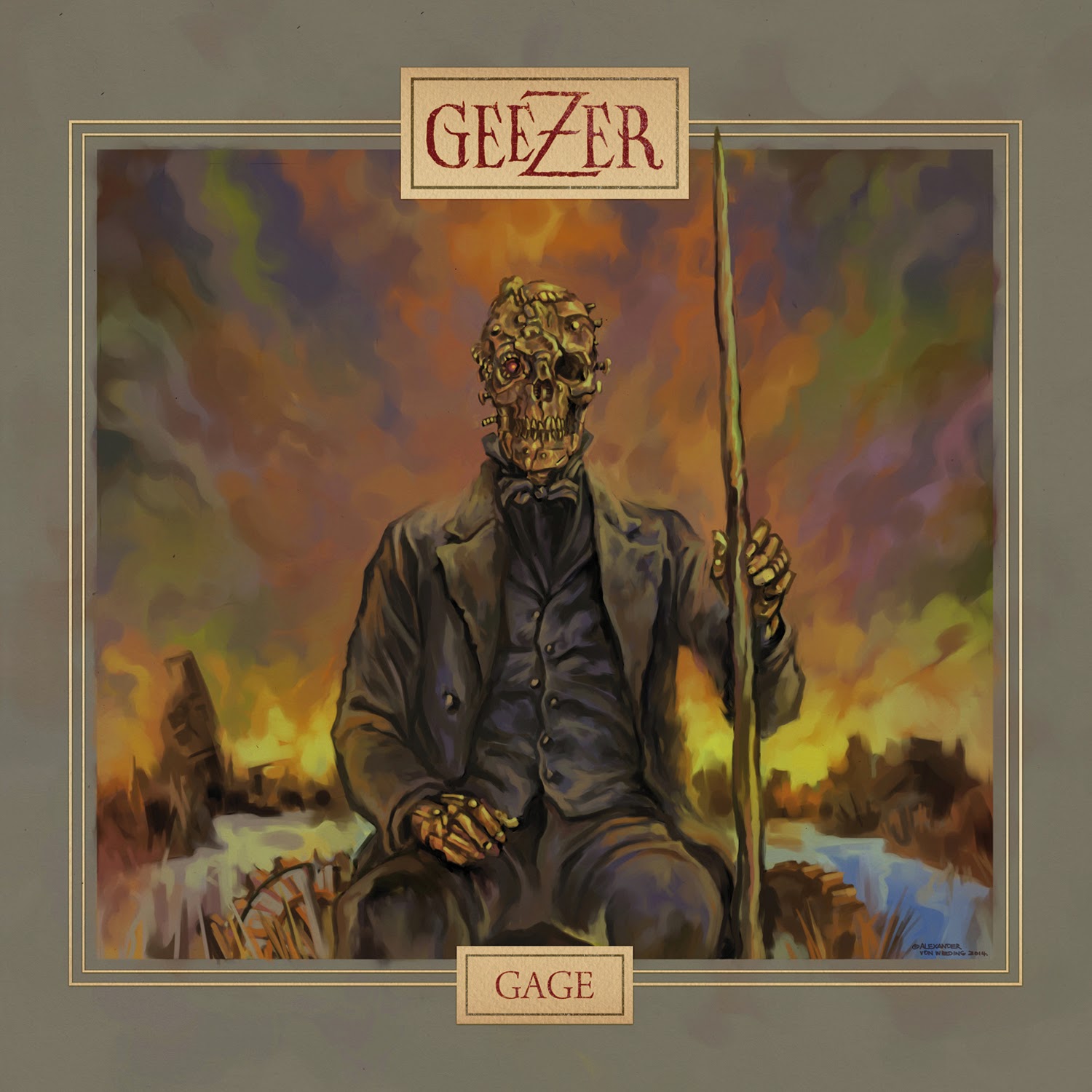 "There’s an authenticity about Geezer that instantly puts them above their peers; the whiskey-soaked growl of Pat Harrington will take you down the Midwestern delta once more, while their heartfelt, gut-level grooves are reminiscent of ZZ Top circa 1973."
--Chybucca Sounds

"Believe me folks when I say Geezer's debut EP is a work of genius. Stoner Rock of the highest order with great psychedelic riffs to match. Brilliant and highly recommended.”
--The Sludgelord


Initially released as a run of extremely limited edition vinyl via STB Records in 2014, it’s little wonder that Geezer’s Gage EP sold out in practically no time at all. Yet such an unruly and original sonic meltdown of metal, psychedelia and blues-rock was never destined to stay gone for long.

This February, thanks to the California-based label Ripple Music it will receive an official worldwide release across Europe and North America.

"We're extremely excited to be working with Geezer to help spread their distorted heavy blues around the world,” explains label boss Todd Severin. “These cats are the real deal. They live it, they breathe it. It all comes through in Gage, which is a masterwork of heavy psychedelic blues. A real pace-setter for the scene.”

Recorded as a follow to their 2013 debut album Electrically Recorded Handmade Heavy Blues by the Kingston, New York trio – made up of Pat Harrington (Guitar, Vocals), Freddy Villano (Bass) and Chris Turco (Drums) – Gage now stands as the most complete release in Geezer’s canon. “The bass is a leviathan of low end rumble, the blues guitar forging molten riffs of iron and steel, and the drum work massive and purposeful.” (Heavy Planet)

Offering listeners an aural appreciation of the American outsider, it drops peyote grooves on opener ‘Ancient Song’, visits the Delta (‘Thorny’) and unleashes a number of fuzz-driven subterranean jams of the highest order. The best of which can be heard on EP highlight ‘Ghost Ride Solar Plexus’, a riotous trip into the hard-edged and heavy acid blues sounds of ’70s groups like Josefus and Blue Cheer. The loose and live feel of Harrington’s raw and unruly guitar and vocal work providing the perfect foil to Villano and Turco’s tight rhythm section.

Already hailed as one of 2014’s best in end of year polls by The Obelisk, The Ripple Effect and Heavy Planet, expect to hear a lot more from Geezer both onstage and on record. Known for their mind-bending live performances, they have shared bills with the likes of High On Fire, Wo Fat, The Midnight Ghost Train, Lo-Pan, Gozu and Borracho, as well as Volume IV, Order Of The Owl and Kings Destroy.

Listen to Gage EP in full at www.ripplemusic.bandcamp.com/album/gage

"Handmade Heavy Blues is a deep and heavy blues based rock. Imagine The Black Keys with a bit more evil in them. Geezer even sounds a bit like Larmon Clamor mixed with a little Five Horse Johnson. Either way you look at it, you’re getting a heavy blues album that covers it all."
The Soda Shop

“It's a powerful and soothing expression of nearly a hundred years of music placed upon an altar that a thousand giants built and cherished, and this one may stand the test of time in ways that will continue to define the genre for a long time to come. Yes, it's that damn good.”
The Ripple Effect

“The whole thing sounds like a peyote trip in the desert. Languid guitar passages swirl visibly like heat rising from a long stretch of highway asphalt. You can taste the sand in your teeth, smell the chopper fumes, feel the urge to finally find solace in a dusty saloon. This shit works.”
Vinyl Junkies

“Smoke-tinged vocals, orange amped guitars and hard rhythms combine to form a sound like Charley Patton getting into a fist fight with Junior Kimbrough over who gets the last bottle of hooch in an old liquor store.”
Stoner Hive