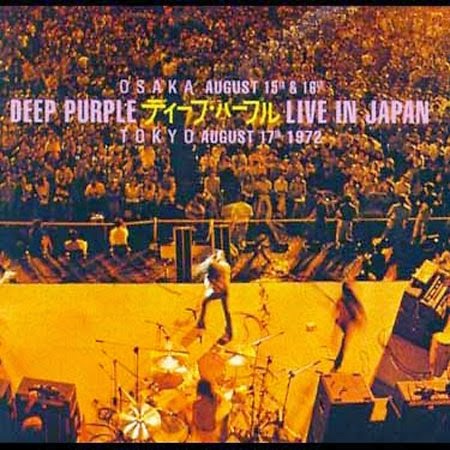 This was the situation.  I was, I believe, 10 years old.  My dad was a music lover and instilled that same passion in me.  He decided that it was time to buy a new stereo for the family.  This was back in the day when you actually shopped for components and put your own system together.  The big news for me is that he gave me the chance to buy the old stereo to have all for my own, instead of all the portable record players I had owned up to that point in my life. I remember that my mom was pissed because she felt he should just give me the stereo, but I was beyond excited and set to work mowing lawns in the neighborhood and doing whatever else I could and by the end of the summer, that stereo system was mine.  And I learned the satisfaction of working for something you really want.

You're probably asking, “What does that have to do with Deep Purple?”  You might also be saying to yourself, “And doesn't this idiot know that the album was called 'Made In Japan'?”.  What it has to do with all this is that when “Made In Japan” came out a few months later, I had a bitchin' stereo to listen to it.  And the release I am referring to came out many years later, but it is called “Live In Japan”.

If you're not familiar, this 3 disc set came out in 1993, and it is comprised of recordings of the 3 shows in Japan that were used to make up the “Made In Japan” album.  I've listened to that album so many times that I think those songs, as they were released on that album, are a part of my DNA.  So when I stumbled across this set, I knew I had to have it, just to hear the different versions, the different takes, the different solos, that this band performed with these songs.  Every night was a little different, the treatment to each song was just a bit individual to each night.  The only drawback is that it does not have the complete shows from each night due to the limitations to the amount of music you can put on a CD and apparently the wish of the producers of this set to keep it to just one CD per night.

But holy cow, what a great set to own if you are a Deep Purple fan!  This point in time was probably the height of powers for this particular lineup, and you can hear and feel that this band was ready to get out on stage and display those powers each and every night.  They came to play and leave it all out on the stage and it is very evident in listening to these recording.  I have always loved the playing of Ritchie Blackmore and Jon Lord in this band, and this release puts all of their improvisational talents on full display.  From night to night you can hear different approaches to each song, solos that are vastly different from one show to the next, and you can hear how they really dig in and play each of their leads as though it might be the last time they ever get to play that song.  The entire band is just on fire over these 3 nights.  Ian Gillan shows off his remarkable range and vocal talents, and his between song banter is entertaining as well. Roger Glover on bass holds everything down and keeps everything in place, which takes some doing with a band like this.  Ian Paice on the drums is just a whirlwind and his solos on “The Mule” are first rate.  In the booklet that comes along with the set, the comment is made that everywhere you listen in the mix, you hear one of the band members just going for it.  That the rhythm section holds it all together is a testament to their abilities.

Yes, I am an absolute fanboy of this release.  At this moment in time, these were five virtuosos of rock, all doing their thing at the peak of their abilities.  “Child In Time” is one of my favorite songs ever, and the versions on this release just give me the chills.  The extended freak outs on “Space Truckin'” are a wonder to listen to, and of course the ubiquitous “Smoke On The Water” was the megahit that everyone couldn't get enough of.  Really though, everything on this set is mind blowingly good.  The fact that nothing was touched up afterward, not one note was fixed or altered in the studio, these shows are presented as they actually went down, is even more amazing.  As I mentioned, these are not the complete concerts.  There was a remastered version of “Made In Japan” that came out in 1998 that added some of the missing tracks, and there was an announcement last year that the full super duper box set treatment was going to be given to this release, so fingers crossed as to what that might bring us.

This is enough though, and if this is as close as we ever get to hearing those 3 fantastic shows that led to one of the all time great live albums, I can live with this.  If you are a fan of this band and have not ever heard this set, it is well worth your time to track it down.  Having this release in my grubby little hands makes my world a better place and maybe it can do the same for you.