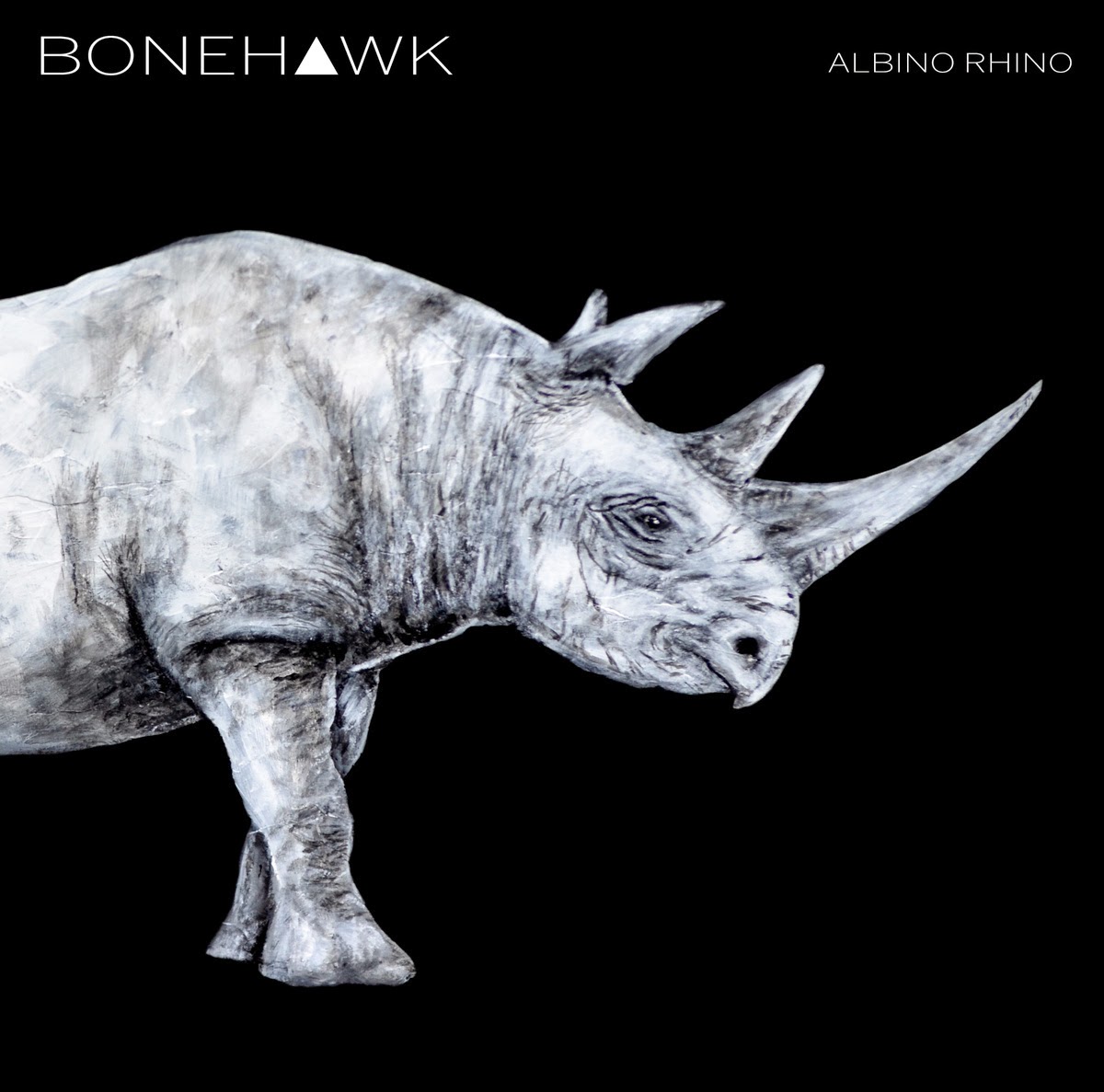 BoneHawk seemed to get a little bit of a late start for whatever reason before taking off in the underground stoner metal scene with their hand numbered bone white 2LP vinyl release. The band was brought to my attention by a trusted music connoisseur and fellow bandcamper, sir Arttu Savvy whom you may have seen floating around bandcamp scooping up nothing but the best heavy, stoner, doom, blues rock and metal to name just a few styles. Anyway, he sent me pre-order links for a kickstarter or one of those links way back in March or something and they got lost in the shuffle until early in the fall he asked if I'd gotten a copy yet.  I totally hadn't even remembered so I went straight out and had a listen and my mind was blown to pieces. I immediately ordered a copy of the now sold out 2LP version.

Right off the bat you're smothered with a stoned out vocal tone and frizzy surface reminiscent of one of my all-time favorite stoner rock bands Fireball Ministry. Not only are the vocals relaxed and full of groove, the distortion is tuned to just the right amount of fuzz. Not too hairy, not too slick and loaded with enough energy to keep the party rocking all night long.

You see this is the kind of music I'd play at my party, or more realistically the kind of music I'd play on repeat by myself either driving down the freeway, or across the desert on a dirt road with windows rolled down and cold one between my legs. Or even more realistically the type I blast on the turntable while I’m in the kitchen making dinner while the kids run amok terrorizing the household. At least they have a good soundtrack right?

Like young kids tracking mud into the house, there are not a lot of new or revolutionary ideas or techniques brought to the table on Albino Rhino. What there is are low rumbling and hypnotic bass lines, smoldering riffs blazing like doobie rings lingering off a dead-heads crusted lips, and vocals crooning like the purr of a winter fire warming the bones after a long day on the slopes.

Nowhere within the album do you find filler, and each song brings its own weight to the bench. Catchy choruses galore and timely backup vocals give a nice flair on songs such as 'Ulysses', ‘Desert Run’ and the standout party rocker 'Tonight We Ride'. If you really investigate you will notice that every “commenter” on their bandcamp page lists a different “favorite song” in their comment about the album. That’s typical of only the most well rounded albums in camp.

You, Waveriders, are in for a tubular pipeline of colossal jams. "You feel it coming, through your town in an unstoppable way. You see it coming, on the horizon, you're gonna ride the wave" sets the tone to the no holds barred rock anthem 'Tonight We Ride'.

The album has a perfect balance with riff after riff and groove after groove. You want melody? BoneHawk bring it! You want groove? The Rhino busts a move! Do you love whipping your hair around in maniacal circles in the middle of the bar room floor? Crank it up! You crave bluesy metallic solos? You're gonna melt away from the scorching temperatures of the dual guitar onslaught of epic fuzzaliciousness.

I mentioned it earlier and I'll say it again, whether I'm out to lunch or not, but this album gives me that same familiar excitement that The Second Great Awakening by Fireball Ministry did when I first saturated myself in the stoner rock realm years ago. I used to go on marathon sessions with that album leaving no spine nerve un-tingled. Not saying it's a copycat or a rip off, more so that this album completely tears on all fronts. Every song shreds, the vinyl package rules, the white koozies offered up for sale at their big cartel keep my beer even colder than the "other bands" cold cups.
There may even be waves rippling in the pipeline for BoneHawk in the near future. Keep your ears peeled, BoneHawk has just begun rawking and we're here to say listen up!!