Ripple Theater - The Story of UFO - Too Hot To Handle 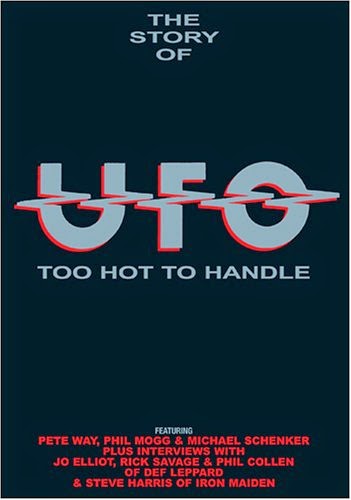 Anybody who knows me, knows I love UFO.  Long-time, one of my all-time favorite bands.  I must have 50 UFO live bootlegs, and I've had the privilege of seeing them live twice, once during the "No Place to Run" Chapman-era and once with the reformed "Walk on Water" tour with the legendary Michael Schenker. "Lights Out" was one of the first seminal albums of my burgeoning metal youth.  I learned my air-guitar chops to "Rock Bottom" and "Out in the Streets."  Yes, I'm a fan.

So when I was asked to review the new UFO DVD, The Story of UFO - Too Hot To Handle, I jumped at the chance.  I'm down with any opportunity to see these guys do what they do.  Quick disclaimer, I don't own many or watch many rock DVD's.  Quite frankly, I don't really have the time.  So a DVD has to be pretty special to capture my time.  This one is.

I don't know the whole providence on this disc.  There was an original version of this released in 2005 which I also have.  But right up, this version is much better.  I enjoyed the first one because it was UFO and it had some cool live footage of one, but in truth, there was something missing.  It all came across as rather flat.

The new version of this DVD kicks serious butt.  The audio has been pumped up and is much punchier.  The songs burst off the screen and feature some legendary performances of many classic UFO songs, played by the band in their prime eras.  Much of the footage is from the short-lived Danny Peyronnel years of the mid-70's and the band is tight.   The rest of the footage mostly comes from the Paul Raymond years and the band is even tighter.  As they grew, the music developed more power, more metal, more strength.  Both eras are real treats to watch for the UFO fan.

And the video even looks better.  The earlier version was a bit grainy and murky.  Now it's much clearer and more vibrant.  Good stuff.

In addition to the many live songs (and bonus tracks on this edition of the DVD) there's some great interviews with the band, talking about their rough and tumble history and relationship issues.  Very informative and really fun.  Plus there're interviews with other rock legends like Joe Elliott, Rick Savage & Phil Collen of Def Leppard and Steve Harris of Iron Maiden offering some good insights on the impact UFO had on the development of Leppard and Maiden.

Fans of the classic line-up will take to this DVD immediately.  The live footage alone is enough to recommend this disc, but toss in the interviews with the band members (mostly Pete Way and Phill Mogg, with some contributions by Schenker) and it's the ultimate UFO set.

Well worth owning for any fan of the band or of classic rock in general.  Even an old codger like myself who doesn't dig music DVD's will always keep this baby on my shelf.

Email ThisBlogThis!Share to TwitterShare to FacebookShare to Pinterest
Labels: DVD review, Michael Schenker, The Story of UFO, too hot to handle