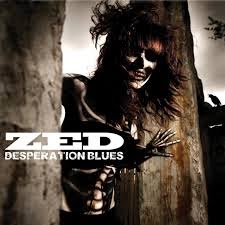 If you’ve been following me on Facebook for the past couple of months, you’ll know that I think the world of these guys and their 2013 release, Desperation Blues. Yeah, I know, I got to the party a little late and The Evil Engineer was pimpin’ them and my life got in the way of my passions, but like any good fashionably late partygoer, I’m bringing the good times along and we’ll run this rip roarin’ event deep into the following day!

Zed hail from The Bay Area and bring a groovin’, semi-funky heavy blues rock with all the bells and whistles. At times, they remind me of the mighty Zeppelin, Thin Lizzy, Clutch and, (here’s an odd reference of sorts) Supergiant. Not that Zed sounds like any one of the aforementioned artists, but perhaps if mixed in a blender with a handful of cilantro and swamp grass the end result would sound a lot like Desperation Blues.

This four piece use the song as the vehicle for their musical prowess to shine. We’re never assaulted with instrumental heroics to make us roll our eyes, yet within each tune, there’s a subtle virtuosity being had and that aspect makes the songs so damn rich in flavor. They never play more than what the song needs, giving the songs the flamboyance and spice that it needs in the most natural of ways. Quite simply, they bring classic rock into the modern age.

The album kicks off with three rockers in a row…up tempo and heavy in tonality, walls of distortion broken up by windows and passageways of open space. Album opener, “Please”, is a prime example…the song is broken open in so many different places that the song breathes and takes on a life of its own. Within every wall recess, nook and cranny, the band drops in little guitar flourishes or a bass nuance to make for a constant point of interest. While the first three tracks are heavy and groovy as all get out, it’s the little textural pieces that they add in that make the songs so compelling.

The title track and side one closer, “Crawl Back To You”, are a bit of change in pace. “Desperation Blues” mines the motherload of funk, both with 70’s-style low end mastery of Mark Aceves and with the dual wah’ed out guitars of Greg Lopes and Pete Sattari, who’s lead vocal work is dripping with passion. More of a mid-tempo burner, “Desperation Blues” is filled with tension that finally breaks as the song comes to a close. “Crawl Back To You” evokes the imagery of a backwoods cabin nestled deep within some muggy swamp. The guitar work is awesome as Lopes nimbly plucks his way through the arpeggios, and then when the rhythm section of Aceves and drummer Rich Harris drop into the scene, well...it’s pure magic. Zed is no one trick pony. They’ve got a deep bag of tricks to delve into and seem to be masters of them all.

And folks….that’s just side one!!!

Side two opens with “More”, which just continues the amazing journey that side one started us off on. Again, more of that funky bass groove accompanied by a wall of heaviness and super sexy guitar work...oh, and Sattari’s vocals…fuck! This song will have you shaking your ass, male and female alike…I just envisioned this one playing in a strip club. Perfect pole dancing theme song here, friends.

Don’t even get me started on “Rain”! Jesus…epic!

Okay…look. You get the gist. I could talk (err…type) about every intricacy of this album, song by song, all day long, but we all have a list of honey-do’s so I’ll cut this short. Songwriting is a craft, an art, and Zed has studied under rock history's greatest. They’ve lived with the Zeppelin’s, Floyd’s, Beatles, and Stones, as well as a laundry list of more modern artists and have studied the art of piecing note to note, lyric to lyric, melody to melody, so forth and onward. And, they’ve crafted themselves a near perfect record. This Zed ain’t dead, baby…this one’s just getting started and I, for one, can’t wait to see what they have up their sleeve for the next release. If it’s half as good as Desperation Blues, then we’re all in for a good time…but my bet is that somehow, someway these guys will improve and grow even more. Check ‘em out, buy the record twice…..you’ll wear out the first copy.

the Vid for 'Please' Is pretty rockin as well!https://www.youtube.com/watch?v=S6tpkvFEQ-k