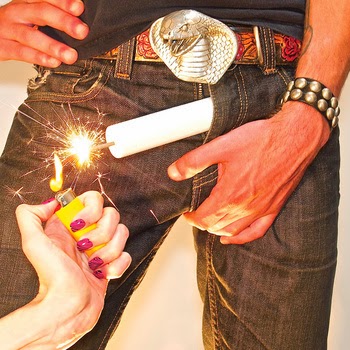 I dropped the needle on this one and almost immediately knew that it was going to be good.  These guys sound like the band you want to hear in a bar on a Saturday night when all you want is to drink a lot of cheap beer and chat up all the cheap women.  If these guys were from my home town I'd go see them every single time they played.  White Dynomite IS rock and roll.  I get tired of seeing rock and roll reduced to pretentious twats like U2, or the evil axis of mediocrity that is Nickelback, Puddle of Mudd, Three Doors Down, Staind, etc, ad infinitum.  Rock and roll needs bands like this.  YOU need bands like this.

There is a lot of swagger and snarl in these songs.  Most of them are 3 minutes or less, just enough to establish the groove, get you moving, and then on to the next one.  This is high energy music. They've got a little MC5 in them.  They've got riffs and guitar tone that remind me of Nirvana.  And I love the singer's voice.  There was a great band out of Australia in the 70's and 80's called Angel City, and this guy's voice is very reminiscent of the singer for that band.  This is the kind of music that sounds deceptively simple, and it's because the band are so locked in and so tight that it all sounds effortless.  If you haven't figured it out by now, I really like this band.

There are some great lyrical one-liners.  Nothing profound, but when you hear “You're the reason my life sucks” in “(Don't Tell Me That) I Need A Doctor”, it's something you can relate to.  “Black Light Woman” has the line “Make my velvet Elvis glow”.  I don't know if that is a euphemism for something, but it should be.  Maybe it's just an inside joke amongst the band members.  Whatever it is, it's a great line.  Simple, straight forward lyrics that you don't have to analyze.  You get it, first listen.  They make you chuckle to yourself and you know exactly what they are about.  “Look Out Below” is just a great song all the way around.  Songs about cars, songs about women, songs about booze.  What else do you need?

This is one of those albums I better not listen to in my car.  I'd be ripping around everywhere at about 90 mph.  You can't help but turn this one up really loud and move to the sounds.  This is the debut album and all I can say is get on with it and get the second one written and done.  I want more of this, as soon as I can get it.  Let this one wrap its hands around your throat and rev the throttle.  It's one ride you'll be very happy to be part of.

Email ThisBlogThis!Share to TwitterShare to FacebookShare to Pinterest
Labels: (Don't Tell Me That) I Need A Doctor, angel city, Black Light Woman, MC5, Nirvana, Rock and Roll, Self Titled, White Dynomite, You're The Reason My Life Sucks