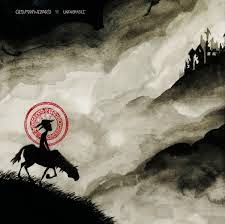 I’ve been away from the review world for awhile, but that doesn’t mean that I haven’t kept my ear to the ground. In one way or another, I’ve tried to keep my fingers on the pulse of the underground, and along this amazing journey throughout the world of music, I’m still blown away by the incredible talents that I find. One of the finds along the way is a little band out of my hometown of San Diego…a bitchin’ three piece going by the name of Old Man Wizard.

And, unlike so many of the stoner and heavy rock outfits gracing our musical landscape these days, these guys actually embody the wizard motif in that classic Arthurian way where there was romance mixed with the intrigue. This SoCal trio also mixes a great deal of that desert wasteland feel that one can imagine of being astride a horse as a weary traveler passing through one old west town after another. These guys do a wondrous job of combining aspects of heavy rock with subtle acoustic passages, creating broad musical landscapes that invoke feelings of solitude and internal struggle, personal conflict versus external strife.

Unfavorable is made up of six tracks, three per side of wax (which is a bad ass looking package including an 11 x 17 poster and two-toned wax), but don’t think of this as an EP. The songs are rather lengthy, though never feeling like a burden to the ear. And, the songs have a very proggy feel without being weighed down by bombast. It’s the kind of prog sound that reminds me of Jethro Tull or recent Opeth outings, but not as lengthy and rambling…more similar to the aforementioned bands in tonality and song structure than in instrumental experimentation.

“Nightmare Rider” brings in the proggy aspects of the band in an Opethian way…the song kicks off with a heavy groove and an understated surf punk riff, then shifts seamlessly to an awesome overlaid textural passage in the second verse. The guitar line in the breakdown midway through the song reminds me of something off of Opeth’s Watershed or Heritage albums. But, probably the coolest and most understated part of the band is their use of vocal harmonies. All three members add their voices to the songs, and it’s this song that is a highlight to this aspect.

“Highway Man” is the lead track on the album and sets the tone with a reverb drenched guitar tone that gives the sense of a desert highway, a lonely and desolate road where bad and ugly things can happen to the good if not prepared. The lyrics depict the main character as a road bandit, robbing and killing all who haplessly cross his path, and I personally find myself captivated by the character. Albeit a stark description of events, there’s just enough shadow play in the lyrics to allow the imagination to fill in the blanks and create a reality of its own.

“Traveler’s Lament” is a slower tune with great layers of texture. Francis Roberts (guitarist/vocalist) has these great moments where he sounds like Steven Wilson (Porcupine Tree, Blackfield), and with the vocal arrangements as they are throughout the album, I can’t help but wonder if there is some influence from the prog-meister.

Light and shade, heavy and mellow, Unfavorable is actually quite favorable to my ears. There’s a lot going on in each track, some subtle, some more obvious. The musicianship is stellar and, at times, ambitious. Old Man Wizard is a welcome respite from the barrage of heavy stoner and doom rock that’s bursting the underground at its seams. It rocks when it needs to and the chill moments are always laced with an edge of danger and immediacy that keeps me on the edge of my seat, waiting with baseball bat in hand to ward off the monster lurking in the dark. Great album? Yes. An intoxicating and addicting listen because something new always seems to pop out when least expected. One of my albums of the year!