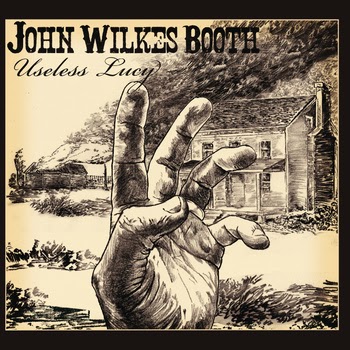 Let me set the scene.

I keep a box of CD's on the passenger seat of my car.  It's full (overfilled, actually) with CD's that are sent in for review.  As I'm driving, I reach into the box randomly and play a little game with myself.  I open up the CD, put it into the player, all without ever seeing who the artist is.  Removes all bias that way.  I simply let the disc spin, crank up the sound and wait.

In all honestly, most of the CD's never make it all the way through, and I can't say my expectations are always high.  A lot of music comes in.  I mean, A LOT of music comes in, and quite frankly, most if it simply isn't my cup of tea.  So, once the CD starts spinning, there's always that moment.  That moment of anticipation.  What's coming for me?   Will it be any good?

That was the scene when this new full-length from Long Island gun-metallers, John Wilkes Booth popped into the player.  I've know JWB for ages now, having reviewed their album "Sic Semper Tyranus" way back in 2008.  I hadn't heard much from the lads since then and when I saw the new CD come in I had no idea what to expect.  In truth, I like the Sic Semper album. Dirt rock as they called it, was a blast of adrenalized, punked up scuzz rock.  But as much as I enjoyed it, it did have it's weaknesses, and quite frankly wasn't an album I pulled off the shelf too often.

So that's the scene.

Then the most ominous doomy notes trickled out of my player.  Hmmm?   What's this?   Kinda cool.   Slowly, almost insidiously, the vocals layered on.  Heavy and foreboding, like a messenger from a 60's horror film, hearkening out the apocalypse.  "Beware of the storm/It comes from the North/You all have been warned."  Holy Fuck!  What is this?   The riff is intricate and heavy and frightening as shit.  The tone is pure foreboding.  Doom personified.  Each second of this track "From the North"was epic and huge and terrifying.  I wondered if I'd slipped a Venomous Maximus CD in somehow, but didn't remember one coming through my mailbox.  I fought the urge to look at the CD cover, and kept listening.

As the song pushed on, I found myself furiously pounding the steering wheel in time to the lumbering thunder of drums.  The vocals grew in menacing intensity.  The guitars crashed and rattled like the earth was moving.

Nothing I remember hearing from the "Sic Semper" CD could've prepared me for the masterstroke of blitzing heaviness that is Useless Lucy.  To say the guys had grown in the time between albums is like saying Nightmare on Elm Street wasn't a child's film.  From what was good, but rather standard "dirt rock", John Wilkes Booth have unleashed a phenomenal collection of heavy tunes that stray from doom to sludge to metal all with a massive growth in musicianship and songwriting.  "Six One" is delicate and laced with pain, yet still fierce in it's rocking.  "13 years" rides a massive sludge riff of pure angst.  "Soaking the Perimeter" lays down a fat bass and drum beat before the fuzzed out riff tears the night apart.

And the prog elements, where did those come from?    Jazzy horns tearing up the end of "Soaking the Perimeter", complex song structures from start to finish.   Tone and mood and ambiance.  This is a thick, thick album, but melodic enough to always be an inviting listen.

Some may wonder if the quasi-rap of "Ladder and Vacuum" was a touch of a reach, but damn, the bass is one funky mother and the song never loses it's desire to rock out.  "Family Crest" ends it all with an extended epic of fuzz, groove and sludge, with enough darkened prog tendencies in the rumbling riff and savage guitar solo to harken a band like Tool.

Overall, John Wilkes Booth have busted loose with an epic of dark heaviness that ranges across various styles without ever losing sight of the prize.  As much as I enjoyed the debut, nothing could've prepared me for what the boys produced here.  It's an intense, epic, crushingly heavy listen with enough variety to keep it fresh and exciting all the way through.

While "Sic Semper"has taken it's rightful place on my shelf in my collecton, "Useless Lucy" hasn't.  I can't stop playing it.

Thanks for the kind words!