I Was The Cat 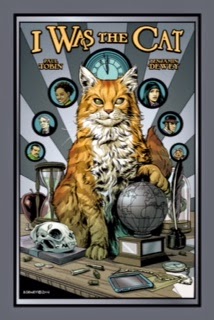 I like to be busy, but one of the downsides of being busy is that I don't have much time to read.  I like to read even more than I like to be busy, so it's one of my conflicts in life that I try to figure out pretty much all the time.  Needless to say, I've been busy and haven't had time to wade through the digital pile of comics and graphic novels lately, but I finally had a chance to get some reading done.

This one is a very fun read.  I Was The Cat is published by Oni Press.  The story is written by Paul Tobin, illustrated and colored by Benjamin Dewey, and lettered by Jared Jones.  As a cat lover, I was drawn in by the title, and had hopes that it would worth spending time with.  It's definitely a light read and before I knew it I had finished the book even though it ran 170 pages. For those of you who don't read many graphic novels, they are definitely not all light reads.

This is a highly entertaining tale of Burma, who is at this point in time an orange tabby living in London.  He contacts a writer as he wants to have his memoirs written and published.  Oh yeah, and he talks.  I mean, how else would he be able to tell his story, right?  Anyway, through flashbacks he tells the story of his previous 8 lives and his many attempts to take over the world.  He appears as a different breed of cat in each of his lives, and has lived through many eras of world history, such as World War I, Egypt in roughly 1180 BC, and Victorian England.  So apparently those 9 lives that a cat has are very lengthy.  The story has some interesting twists and turns as Burma has a Forrest Gump like way of showing up in major historical events.  But the bottom line is that his previous attempts at world domination always fall flat, like Pinky and the Brain.  As his memoirs unfold its discovered that in his 9th life he is yet again trying, and this time succeeding, at taking over the world.  But you'll have to read the book to find out how, and whether or not he actually does it.

The story is inventive and an interesting twist on cats and some of their fabled 9 lives and other quirks that you will know well if you've ever had them for pets.  It is well paced and never for a second seems to drag or go off on tangents that make no sense.  The illustrations fit the story well and add to the telling of the tale.

Hats off again to Oni Press for another well done novel.  They have continued to put out a variety of books in a wide range of styles and modes of storytelling and keep me coming back for more.  I Was The Cat keeps the string alive.