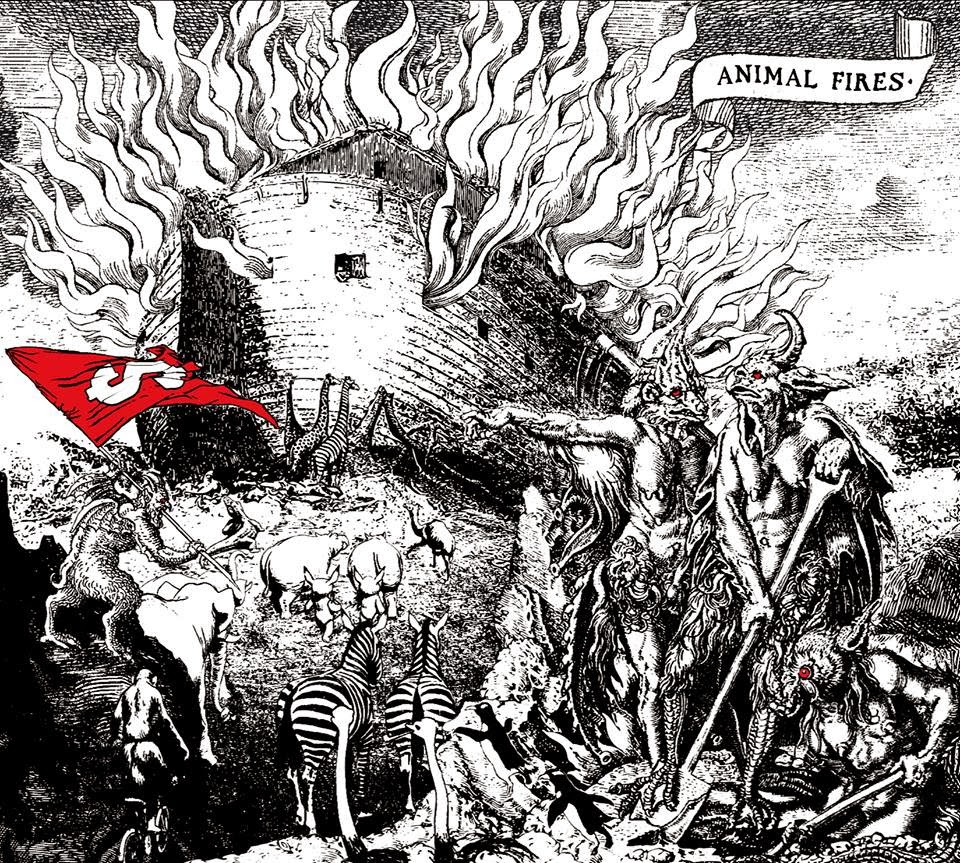 A good friend of mine introduced me to Human Services a while back when their self-titled debut was released. I fell head over heels for these Virginians, so when the new album 'Animal Fires' arrived in my mailbox, I was stoked to say the least. What they brought to the table then is still very much present but the band has pushed themselves tremendously, expanding their already diverse and deranged musical palette.

Staying true to themselves 'Animal Fires' is as deranged and amazing as it's predecessor, although Human Services has started to hone in on a path that only they know where it leads. What I mean is while their self-titled debut drew inspiration from a huge well, their sophomore release has been trimmed in many ways focusing instead on music and sounds that really make the band what they are...you can call it shed and expand, if you like. And within the sphere in which they operate anything goes. The universe is the limit and they sure go full tilt to reach there.

Their noisy, droning sludge throws a curveball with 'Down To Your Last Goat'  which surprises the hell out of me. Picking up after the instrumental segue 'Workhorse', it's all about the blues on this one. Slow, dirty, sleazy and full of despair Human Services are indeed on their knees. Hell, I keep seeing visions of myself strung out in the gutter whenever this composition comes on. Don't know if that is good or bad but I love it! Another standout track is 'The River Pig'. Built up around tribal drums and noises/ electronic soundscapes it reminds me of Murder Inc. with a mental patient belching out his pain. Keeping it minimalistic yet insane 'Long Distance Beekeepers' is by far the strangest song on the album. Again built around tribal drums, sounds and samples with a strumming guitar aiding the Les Claypool-esque vocals beautifully. Weird and fantastic!

It is always rewarding when a band you really like deliver with each new release, and even more so when they constantly evolve. And that's exactly what Human Services has done on 'Animal Fires'. No worries, many of their characteristics are still present, it's just that they have taken several steps forward creating what you can simply call The Human Services' Sound. Personally they sound like no one else and that's how I want it.

Don't know what they put in the waters around Hampton, VA, but it must be damned good. Maybe more bands should migrate there, drink the water and learn from Human Services how to be your own entity and not to worry about blending in. In these days when there are more bands than ever you need a distinct, unique identity to stand out and not drown in the flood of sameness. Human Services has reached that plateau of musical evolution where they are completely free and unshackled. So waveriders and aspiring bands out there, look at these guys and learn. Because they are the real deal!