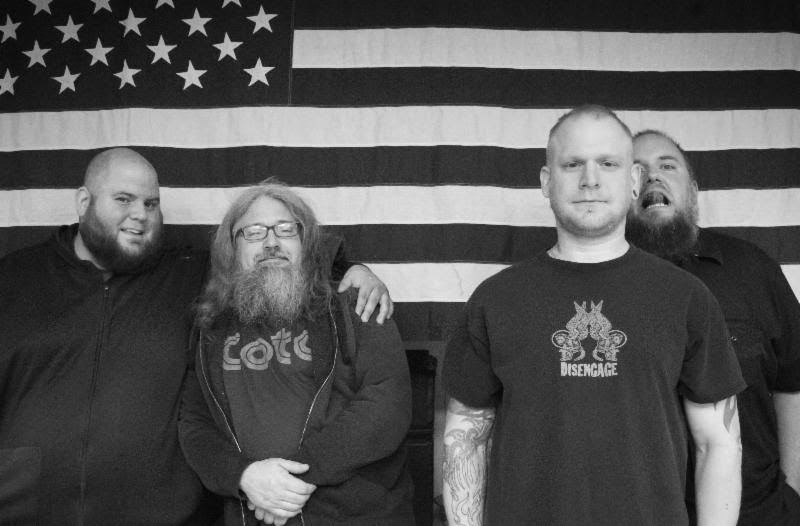 With a tour supporting Black Cobra just one week away and a brand new record, the fittingly titled Colossus, on the horizon, Ohio riff bringers LO-PAN are pleased to uncork opening track, "Regulus," via Noisey.

Elaborates vocalist Jeff Martin of the tune, "'Regulus' is the brightest star in the Leo constellation. It's a multiple system consisting of four stars. 'Regulus' is also Latin for 'prince' or 'little king.' The song is about a dream I had. In the dream I lived on a planet in the regulus system and the star was about to explode. The planet is about to be destroyed. And I'm reflecting on life as a whole facing the knowledge that I'm about to die basically."

Adds Noisey: "Colossus is a great name... In one breath it handily evokes images of majesty, grandeur, and past glories... It hints at hard-won battles and blood seeping into foreign sands, of rough-hewn idols and monoliths crumbling into the foaming sea. It paints a pretty goddamn inspiring picture. That being said, on a less romantic level, Colossus also slots neatly into doom's obsession with really big... things. Ours is a world populated by behemoths and mastodons, dying giants, sea lords, and elder gods, whose exploits and flights of fancy are riffed sweatily into existence by big burly dudes encircled by halos of amplifier tubes. It's larger than life, and if it's done right, it's way too much for your shitty foam earplugs to handle. It's awesome."

Check out "Regulus" before your imminent demise, now playing at Vice's sound portal at THIS LOCATION.

Named for the Colossus of Rhodes - a ninety-six-foot statue of the Greek titan-god of the sun, Helios, constructed in 280 BC to mark a failed siege and the indomitable nature of the Greek city of Rhodes itself - LO-PAN's fourth full-length, Colossus, serves as their most personal composition to date and a true testament to their evolution as a band. Having honed their musicianship through perpetual touring and partnering with producer/engineer Andrew Schneider (Unsane, Rosetta, East Of The Wall et al) at his Translator Audio Studio in Brooklyn, the Columbus four-piece knew exactly what they wanted out of this recording. Together they belted out ten smolderingly soulful psalms that reveal just how much they've moved beyond their influences to arrive at their own sound - a style built on aggression without caricature, fuzz without cliché, melody without redundancy and their meanest groove to date.

As a precursor to the release of Colossus, LO-PAN will take to the streets next week on a gargantuan live excursion alongside San Francisco volume perpetrators, Black Cobra. The trek will commence in Phoenix on August 28th and wind through nearly three dozen cities, with additional LO-PAN headlining shows added to the jaunt. See confirmed dates below.

Colossus will be released via Small Stone October 7th, 2014.

"With enough stoner rock goodness to destroy bridges and skyscrapers alike, LO-PAN show that they are one of several absolutely essential rock outfits working today and a major force to be reckoned with." - Sputnik Music