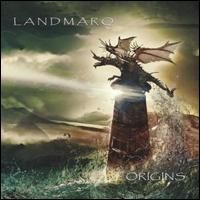 I usually hate "Greatest Hits" albums, especially from obscure bands where, to be blunt, the band's song choices are questionable.  Too often anthologies, like those "Greatest Hits" albums, come off disconnected.  In the case of obscure bands, they can come off as a huge vomit of ego, especially when most people have never heard the music before and, before they happen upon the release, didn't even know the band existed.

One recent release broke all of these preconceptions. I received an advance copy of an eighteen track, two disk release from Landmarq, a band I had never heard, titled "Origins: A Landmarq Anthology."  Of course, I was cynical and hesitant.  There was no information sheet, .pdf, website link . . . nothing that accompanied the release that explained anything about the band, however, it was said to feature songs from their 1992 debut through 2014.

I perused the song titles.  Not one of them invoked recognition. I procrastinated listening to it until after the album was released.   I came to it with every intention and belief it would be horrible.  Finally, I sat down with a plan to listen to just a track or two and render a verdict.

I turned the album on and almost immediately it reciprocated.  Track after track of progressive rock, a veritable synthesis of the hearts of Yes, Rush and Van Halen, exploded from my midrange, woofer and tweeter.  I promptly googled Landmarq and discovered, via wikipedia, for years the band has worked with progressive and classic rock Royalty, "including Marillion, Focus, John Wetton (Asia, King Crimson, Roxy Music), Steve Hackett (Genesis), Hugh McDowell (ELO, Wizard), Nik Turner (Hawkwind), Annie Haslam (Renaissance), IQ, Pendragon, Arena and even Suzi Quatro."

Over the years the band members of Landmarq have changed, and they took about a five year hiatus from 2006 through 2012.   Thus, Origins hosts a number of different singers and keyboard players.  That makes it all the more interesting.

If anything, Landmarq's Origins has taught me a lesson.  To be objective you must keep an open mind.  Change can be good - very good.