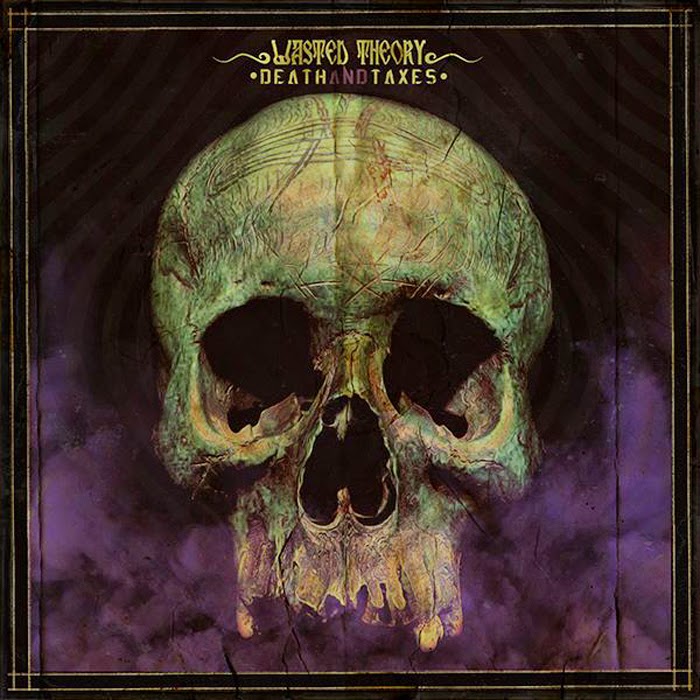 These heavy hitters hail from Delaware which is the second smallest state in the country and it's famous for...hmm I don't really know! However, with the release of their spanking brand new album, "Death And Taxes", Wasted Theory are on the way to bring fame to their unknown home state.

A bone crushing rhythm section in the shape of Jonathan Charles and Brendan Burns, on bass guitar and drums respectively, paves the way for guitarists Larry Jackson Jr and Dave McMahon to lay down the law. Building their music on a foundation of bluesy heavy 70's rock with powerhouse riffing, stoner and doom metal. By keeping it down and dirty and sleazy as well, you have a killer combination on your hands. And Wasted Theory nurtures this so well.

In this day and age the band couldn't have gone for a more appropriate title. Death and taxes are synonymous since taxes lead to death, well to premature death, that is. And this album is definitely the perfect soundtrack for an early "take-off". The addition of McMahon has boosted these Wasted boys' twin-axe approach as they trade riffs and licks back and forth like they've been playing together for decades. For the most part their music is mid-tempo with the emphasis on pulverizing the listeners. But fret not, they change things up and avoid elegantly all the trappings that could have turned this wax into a stale uninteresting affair. Instead they have a true gem on their hands.

Standout tracks are 'Celestial Voodoo Lounge', 'Absinthe Queen' and 'Black Widow Liquor Run'. The first one is mid-paced, led-heavy and bluesy with Larry's awesome gravelly voice bringing a huge sludge-feel to the music. A bit of Earthride seeps into the knee-busting riff-fest that is 'Absinthe Queen'. A skull crusher if there ever was one, if you ask me. Southern rock played at 150mph with a huge dose of sludgy delta doom thrown in and you have the brilliant 'Black Widow Liquor Run'.

What can I say? Don't hesitate, get a hand on a copy of 'Death And Taxes', crank it up, drink some beer and go fucking crazy! If bands from Delaware are as damned good as Wasted Theory, then the forgotten state might have found their way to stardom. In the meantime, check out these guys because they are great! Nuff said folks!