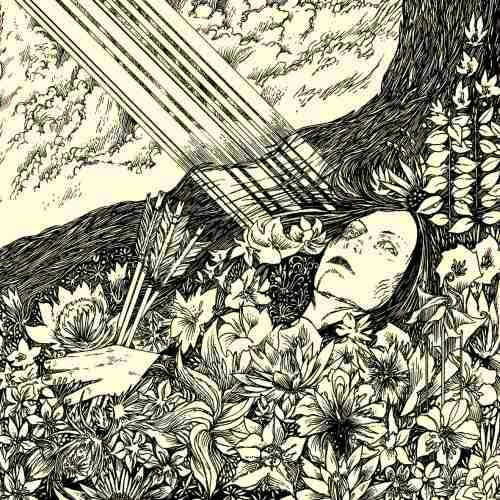 One of the true pioneers of psychedelic retro 70's occult rock, Jex Thoth has been around since 2005. First under the name Totem but after one release, a self-titled EP, the band adopted the name of their mystical and elusive singer and sole original member. This sense of mysteriousness is further enhanced by a very sporadic release schedule as well as hardly giving any interviews. 'Blood Moon Rise' is only Jex Thoth's second full-length so what has happened musically since the self-titled debut from 2008?

Always having had an etheral feel Jex Thoth were more guitar-driven before, whereas with 'Blood Moon Rise' the keyboards has been brought to the forefront. What I mean is instead of being used only as a back-up instrument, it is also used to create suggestive moods and imageries. And it is magical. Fantastic dreamscapes appear in my mind as I close my eyes and let the music absorb me. Don't get me wrong, the guitar has not been removed, in fact it has a clear distinct place in the music. However, the new shift has elevated Jex's shamanistic leanings a lot allowing the songs to transcend in a whole new way.

It only takes a few seconds before Jex's mesmerizing and hypnotic voice pulls me into her web. And while weaving her spells the music rises up like a morning fog and envelopes me, pulling me deeper into dimensions unknown. There's no point trying to fight it, so I let my guards down and embrace it all. The visions passing through my mind are breathtaking and soothing at the same time. Each spin of 'Blood Moon Rise' calms me down while, at the same time, opening my senses to cleanse all negativity from my thoughts. You can't ask for more in an album.

There are two tracks  I return to more than the others, 'The Places You Walk' and 'Into A Sleep'. The former is the most rockiest on the album with some amazing hooks. Simultaneously, the music has a hypnotic feel that soars and twirls around the amazing guitar parts. The latter is the exact opposite. Slow and jazzy in lack of better terms with strong vibes of Pink Floyd at their trippiest moments. The bass guitar takes centre stage acting like the heartbeat of song and Jex's sultry voice is simply beyond words.

If five years is what it takes to create such a magnificient album, then let it take five years. Some music is better if it's done in no time while others require time to fall into place. And the music of Jex Thoth can not be rushed into existence if you ask me and 'Blood Moon Rise' is a perfect example of that. Listen to it and you know what I mean. Excellent, truly excellent music is what's on display here!