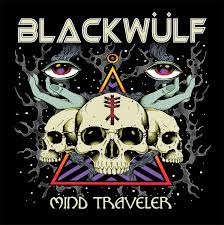 Is it possible to conduct a review without using the word "riff" or "Sabbath? Likely depending on what type of music you're investigating. In Blackwülf's case, if you take the previous sentence out I get dang close but can't help giving into the temptation of using one of them.

Blackwülf has a mildly less theatrical Sabbath buzz and a fuzzed down thrashy Megadeth wale, with the sinister energy of both. As much as I hate pulling the Sabbath Comparison Card I unintentionally end up yanking it out with bands like this that no doubt exhibits a modest resemblance other than the "black" aspect of the name. Speaking of, is black the most overused color in the band name roster or what? On the other hand you could just as easily juke towards a Motorhead juxtaposition with Blackwülf's scorching debut. Alex Cunningham’s punky vocals bellow gravelly with ominous intent as Pete Holme’s stoned out guitars thrash at a biker party pace much like any given Lemmy school night.

The 1-2 punch of "Royal Pine" / "Thunderwitch" stir together a slowed down Slayer meets Cryptic Writings era Megadeth thrash attack while the next two songs bring more of a retro stoner-punk flair. The overall album vibe could be summed up by the chorus line from the song, "(un)Frozen in Time". Classic metal crunch dripping with modern rock flavor as if it was frozen during the 70's, aged like whiskey and thawed out over a tire fire, funneled through a beer bong and straight into an outdoor mosh pit.

Comparisons are subjective to a degree but I still got a faint nostalgia on a few songs worthy of a Sabbath mention and intended as a baseline to spark attention. I may have failed at withholding the ‘Sabbath’ comparison, and it's definitely a lot more subtle than many bands accused of the copycat crime, but I did manage to abstain from worshiping the almighty ‘riff’, other than its use here and at the beginning. And make no mistake Mind Traveler is not short in the ‘r’ word department. I just got tired of saying it in every single review. It’s a great word, just a personal observation in general that I felt I needed to bring to light.  Either way, whether your mind is set on rock, metal, thrash, or punk Blackwülf travel full spectrum on their debut Mind Traveler. Give them some bandcamp love and let us know what you think. We always enjoy feedback.