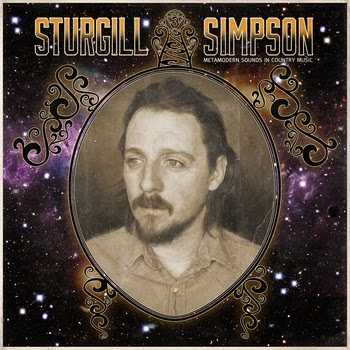 Let’s talk about Sturgill Simpson.  If you ask me, which you didn’t, but if you did I’d tell you that Sturgill has just saved country music.  Released May 13th, Metamodern Sounds In Country Music is quite literally everything I thought modern country music could be.   It’s kind of like if Waylon and Willie had a kid...but they did and this guy is way better.  Comparison’s to Waylon and the outlaw movement are inevitable. However, in a modern setting, Sturgill has less in common with Hank III than he does with, say, Dierks Bentley, which is weird to think about, but true.  Then again, this record is sort of a paradox.  Perfectly blending the vernacular of classic country with Dave Cobb’s ethereal production job, you have what will probably end up the most terribly underrated country music record this year, but more on that later.

First off, if you can’t tell by the cover, this album is trippy (in the most beautiful way).  After two minutes into some of the most genuine country crooning to ever cross my speakers, the lead-off track, “Turtles On The Way Down”, Sturgill breaks the mold with obvious psychedelic flourishes.  It made me want to cry.  With a voice that comes at you like a velvet shotgun, it would be hard not to.  Like I said....it’s EVERYTHING I think country music could be.  Even the music video for the track is beautiful and engaging; a perfect compliment to the composition. However, the single is just the start of this record.

This isn’t a record with standout tracks.  It’s a standout record.  It’s been forever since I have heard anything that just seemed so natural to me.  Songs like “Life of Sin”, “Just Let Go”, and “It Ain’t All Flowers” boast some off the most pertinent lyrics to anyone who has wrestled with the music business and the existential crises that can emerge from living the parallel life style...or just life in general.  Sturgill’s word-smithing seems fluid, natural, and relevant.  You don’t have to be a struggling musician to appreciate the beauty that is Metamodern Sounds In Country Music; I just happen to be one.  So, Sturgill, if you are reading, I should take this time to extend a major thank you for creating this record.  You blew my mind and quieted it all at the same time.   There’s a lot of comfort in knowing that someone out there hears country music the way I do.

Now for that ”underrated” thing.  I listen to 35 hours of modern ‘country’ music a week because that is what plays at my job...for the last 8 years.  I’m pretty up on the who’s who of the scene.  I have not heard one mention of this record.  It’s kind of ridiculous, as we all know modern ‘country’ to be, but any one of these songs could fly on the radio....except they are too square to put anything that good in their programming.  Granted, the single mentions marijuana, LSD, psilocybin, and DMT affectionately, but I swear I have heard Eric Church going on about drinking a little drink and smoking a little smoke.  Maybe it’s the amazing production turning them off, but apparently Tim McGraw can use auto-tune and Jason Aldean can rap about living on a dirt road.  There of course is Kacey Musgraves with her Nudie-suited band (that reads: smells of record company varnish....but in all fairness, they are a smoking band) playing that “Arrow” song where she is all about getting stoned but they don’t play that one on the radio either.  Apparently Sturgill didn’t get that in his deal.  Whatever, we all know the score. Fuck modern country music.  Metamodern is where it’s at, whether that is on the radio or just streaming from his Bandcamp.   Do not pass up a chance where you get to listen to this record.  This is a record for music lovers.  No genres needed.

Bufftbone said…
There isn't anything I can add to this review that hasn't already been said. That said, this album should be on all of the best year end lists. It is the complete package. Well written, performed, recorded, mixed, etc.
May 28, 2014 at 9:22 PM