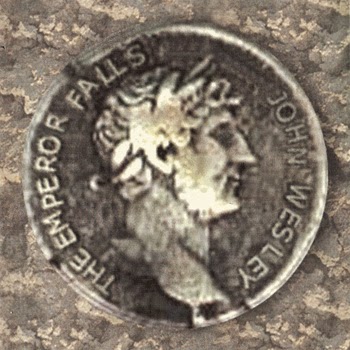 Many times you come across bands and artists purely by chance and occasionally in a more unorthodox fashion. My introduction to John Wesley is defintely such a case. I had seen his name in the performer list on Fish's 'Sunsets On Empire' but paid little attention. Then when Fish came to Gothenburg, Sweden touring this particular album a lone figure armed with only an acoustic guitar strolls across the stage to a microphone and starts playing. This guy was compelling and captivating and, although it took me a while to grasp it all, I was hooked. About an hour later he was back on stage as Fish's lead guitarist...please welcome John Wesley!

Because of the acoustic foray live I expected 'The Emperor Falls' to be the same but that's not the case. It is morose, low-key and reflective akin to an acoustic setting, however a full band is backing John and as always his drumming partner-in-crime Mark Prator is present. If memory serves me it only took two spins and 'The Emperor Falls' had me completely enveloped and absorbed. John wrote this with his heart on his sleeves and that rubbed off on me immediately, you know it's one of those albums that talks only to you. Appearing before me during a dark part of my life it became a beacon for me, a life saver if you will as well as an eye opener. I realized more people than myself are struggling real hard in life and they make it by so why can't I? Regardless what anyone else thinks about it, 'The Emperor Falls' will always be more than an excellent record to me.

Singing about missed chances, broken relationships, heartache and being constantly left behind while trying to do your best is the red line through all the songs. 'Out Of Your League' is about always letting you cheating partner back despite all the torment your going through. 'An Ordinary Man', 'Days That Won't Let Go' and the amazing 'Gift Of A Woman' all sings about losing your partner and suffering heartbreak simply because you're not deemed good enough anymore while 'One Step Behind' is just that...one step behind, being on the outside looking in. There are fourteen songs on here and they are all just as good but the ones I have mentioned stands out in such a way I had to mention them.

Falling mainly in the alt rock genre John Wesley does rock out here and there as well as going acoustic on occasions. Singing mostly like a whisper to bring out the hurt, the real pain is brought out whenever belting out his words of anguish. There have been a lot of focus on the darker, sadder parts of life but in all this there is hope and strength and these days 'The Emperor Falls' is one of my go-to albums when I need a kick in the ass, when I need to step up. An album can't get much more praise than that.

John has come a long way since this release. He has played with Marillion, Steve Hogarth and Steve Rothery appears on here, he has been the touring guitarist for Porcupine Tree for many years and Alex Lifeson of Rush appears on his brand new album 'Disconnect'. Go to his website and check him out. He is a brilliant singer/songwriter and an excellent guitarist who writes magnificient music.