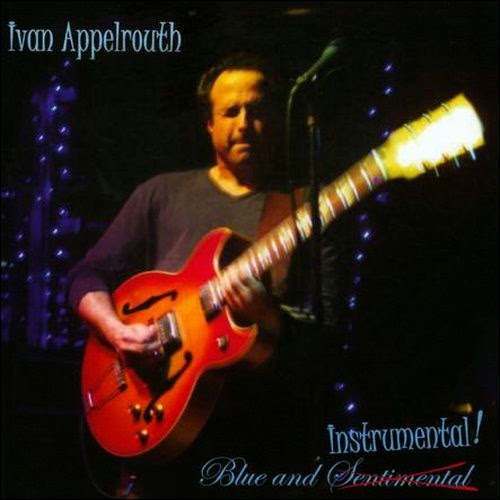 Some artists and albums grow on me.  Initially, I may not care for a work, but, I will occasionally put it in the digital rotation until something else comes along that catches my ear.  My procrastination in clearing out the playlist queue at times has led me to reassess my first impression and come to really like an effort that I originally dismissed.  One such artist and album has been popping up in my playlist now and then since its release in 2011 - Ivan Appelrouth and his fifteen track album titled "Blues and Instrumental!"  It took a while but now I get it.

For the past two decades there has been very little money for most gigging musicians in playing gigs or selling music.  Due to free file-sharing and streaming services, and the decline of physical media in favor of downloads, many artists have had to turn to other ways to keep the music alive and make a living.  It is that desire that I believe led to Ivan Appelrouth's 2011 release.

Appelrouth is an obscure, but rather well-credentialed, blues guitarist.  He played with his teacher and mentor, the blues legend Duke Robillard, on several releases and also as a session musician on albums by a number of other well known blues bands.  Blues and Instrumental! was Appelrouth's first release as a band leader.

It is not your ordinary blues album.  First, it is entirely instrumental (over time that formula has come to remind me of the approach The Ventures took to making albums) and, second,  it is recorded to try to land TV and movie placements.  In 2011 few artists realized that the only place decent money in the future would be made in making and playing music for media placement deals.  TV and movies pay nicely for music performance rights and the artists get mailbox money every time their music runs.  Appelrouth appears to be one of the first in the blues community to realize that those placement deals would become the difference between a comfortable existence, survival, endless touring and life on the street.

On Blues and Instrumental! Appelrouth's guitar is accompanied by John Cocuzzi on piano and vibraphone; Dave Cwiklinski on trumpet; Tommy Hannigan and Steve Potter on acoustic and electric bass; "Big" Joe Maher on drums; Steve Utt on Hammond B-3; and Chris Watling on tenor and baritone saxophones.  The album is full of originals and sprinkled with covers of songs by some of Appelrouth's biggest influences - T-Bone Walker's "Strolling With Bone," Albert Collins' "Frosty" and Acker Bilk's "Stranger on the Shore."  Appelrouth also swings and jumps like the Duke.  Check out "Booky's Boogie," "Drivin' With Ivan" and "The Uptown Downtown Groove."  It took me a while, - plenty of unhurried listenings - before I fully appreciated how smokin' hot Appelrouth's lead guitar is and how well he uses his rhythm, horn and keyboard sidemen.

Appelrouth understood something well before most in the industry and that is this - in the new music economy, pay the bills by gigging as much and as often as you can.  However. your financial security may only come through successful media placements and licensing. The audience that will sustain you financially is movie and TV producers.  The audience that will sustain you physically and emotionally shows up for your shows, and more will if you are successful in obtaining media placements of your material.  It comes down to this, if you want to be successful today, and in the immediate future, know your audience.

That target audience isn't you or me, unless you are a movie mogul, but we still get to listen and be fans, even if it takes us awhile to get there.